Pilot failed test in Australia, forcing carrier to cancel a flight from Melbourne to Wellington

Singapore's aviation regulator has launched a probe into the case of a Singapore Airlines (SIA) pilot who failed an alcohol test in Australia before a flight on Saturday.

It is the first time in 10 years that the Civil Aviation Authority of Singapore (CAAS) is investigating such a case, its director of airworthiness and flight operations, Mr Alan Foo, told The Straits Times.

SIA, which has suspended the pilot, is also investigating the case.

The incident last Saturday forced the airline to cancel a flight from Melbourne to Wellington, New Zealand.

Australia's Civil Aviation Safety Authority officials had conducted a random drug and alcohol test on all crew members before they started their pre-flight checks.

The pilot in question was found to have a higher-than-suitable blood alcohol limit, and did not pass the test.

Mr Foo said the CAAS takes a serious view of the incident.

"It is an offence for any person, including a pilot, when acting as a member of the crew of an aircraft operating out of our airports or for Singapore-registered aircraft, anywhere it is operating, to be under the influence of alcohol."

Under Singapore's Air Navigation Order, the offence carries a maximum penalty of a fine of up to $100,000, and five years in jail.

Said Mr Foo: "It is the responsibility of each pilot to ensure that he or she does not commit such an offence." 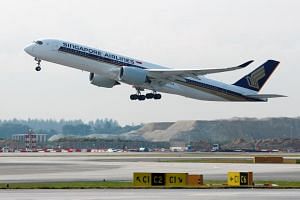 Singapore carriers must also ensure that members of their flight crew abstain from alcoholic drinks for at least eight hours before operating a flight, CAAS said.

SIA, however, requires its flight crew to abstain for at least 10 hours.

Pilots and cabin crew may report to the CAAS if they suspect that a member of the flight crew is under the influence of substances or alcohol, the authority said.

On top of that, airline pilots licensed in Singapore have to undergo an annual medical assessment, which includes an assessment of their alcohol consumption habits, in addition to the physical examination and medical investigations that are usually carried out, Mr Foo said.

SIA said that while it does not conduct random alcohol or substance tests, members of the airline's flight crew are required to undergo any drug and alcohol tests that are administered by the authorities.