SINGAPORE - Forward planning and building ahead of demand are important to ensure that Changi Airport keeps ahead of its rivals, Transport Minister Khaw Boon Wan said on Friday (Aug 3) at the official opening of the airport's Terminal 4 (T4).

"But building ahead of demand requires sound judgment. It is not simply 'build and they will come'. The aviation industry is unpredictable, subject to many disruptions, including oil prices and, at times, unhelpful governmental interventions," he said.

"Adhering to straightline projections may end up in tears. We must be sensitive to potential disruptions and be ready to make strategic changes promptly when warranted," Mr Khaw added.

The terminal, which took about four years to build, is a vital part of Changi's plans to accommodate a growing number of travellers until the mega T5 is ready around 2030.

Since it started operations on Oct 31, the terminal has handled about six million passengers.

Already, 32.1 million passengers have passed through Changi's gates between January and June this year, 5.5 per cent higher than during the same period last year.

Mr Khaw highlighted a memo Changi Airport Group (CAG) chairman Liew Mun Leong sent his colleagues after T4's soft opening last year. In it, Mr Liew pointed out that planning ahead had always been part of the CAG modus operandi.

Wrote Mr Liew, who has been involved in the various stages of CAG's development since 1975: "When Changi Airport opened in July 1981, both Changi and Paya Lebar Airport together handled only about eight million passengers that year.

"Amidst severe scepticism from senior economists, we masterplanned Changi's future capacity to cater for the maximum demand of 30 million passengers per annum (mppa). We were proven right. Indeed, Changi Airport hit that maximum plan of 30 mppa as early as 2004, much sooner than expected. And recently, on Dec 18, 2017, Changi hit 60 mppa, double the maximum 30 mppa we originally envisaged for Changi."

CAG's strategy that "supply drives demand" meant that infrastructure had to be planned and built ahead of capacity demands, Mr Liew said. This would also ensure that the airport would not be caught on the back foot with insufficient airport capacity.

"An overcrowded airport cannot be an attractive airhub," he added.

Changi's latest terminal is now home to 11 airlines, including Cathay Pacific and the AirAsia group of carriers.

T4 will also function as a test bed for technology that will be used in T5. 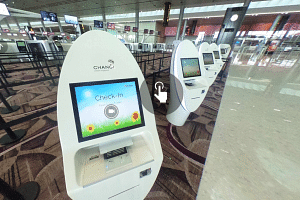 It is only in T4 that passengers can experience start-to-end automated do-it-yourself processes.

The terminal is the first at Changi Airport to use facial recognition to ensure the same traveller moves from the first to the last step - for check-in, bag tagging, immigration clearance and boarding.

While operations at T4 have been mainly smooth in the past nine months, there was initial confusion when it opened when some travellers found that they were not able to access the automated boarding system.

This prompted the airport to put up signs and video content at the boarding area to inform travellers that they can use the automated gates only if they have completed automated immigration clearance. Those who have not should head to staffed counters instead to be processed manually for boarding.

This is why T5, being designed in scalable modules, will be built in phases.

"This is a practical approach to avoid over-investment and being caught wrong-footed, should our projections turn awry," Mr Khaw added.