The Straits Times understands that the shorter service hours will be in place till further notice.

Canadian engineering company Bombardier, the original equipment manufacturer of the BPLRT, will use the extended maintenance window to renew the 19-year-old network, which has been plagued by reliability issues.

The works include upgrading the network's power rail systems and signalling system, as well as replacing all 19 first-generation trains with new and improved ones. The trains have been in use since the line opened in 1999.

Thirteen newer trains that were put into service in 2015 to expand the BPLRT will also be equipped with the new Communications-Based Train Control signalling system.

The new system will have better control of train speeds and more redundancy, meaning it will have back-ups to keep trains running when faults occur. 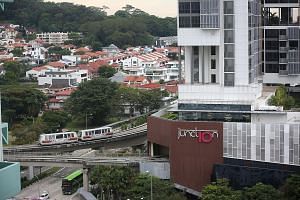 In addition, the new trains and signalling system will have condition monitoring systems that will allow engineers to conduct predictive maintenance.

Ten Mile Junction station will also be permanently closed from Jan 13, along with BPLRT Service C.

SMRT said the vacated station space will be converted into a stabling and testing ground for the new trains.

The BPLRT network has seen periodic closures and late openings on Sundays since November last year, which have helped speed up maintenance works, SMRT added.

LTA chief executive Ngien Hoon Ping said the upcoming works are part of ongoing efforts to improve the BPLRT's reliability. The bulk of the $344 million renewal project is expected to be completed by 2022.

SMRT group chief executive Neo Kian Hong said the train operator will be working closely with the LTA and Bombardier to ensure that renewal works are carried out on schedule and safely.

Bus services 920, 922, 973 and 974 will be extended till around 1am to serve commuters within Bukit Panjang, in the light of the shorter BPLRT operating hours.