Bicycles hanging from trees, their frames infested with ants or, worse, stripped of their parts.

These are what marshals hired by bike-sharing firms have come across while dealing with damaged and haphazardly parked bikes. Some bikes have been thrown into drains or even covered in sand on beaches.

Often inconspicuous, more than 200 bike marshals are deployed around Singapore daily to ensure the rental bikes are parked properly, cleaned and in working condition.

When The Sunday Times followed the marshals on four separate occasions last week, some bikes were found in bad shape. The tyres on one in Pasir Ris were caked with mud, while the handle grips on another in Bukit Batok were missing, apparently stolen.

On a typical shift, bike marshals, who only patrol an area allocated to them, locate bicycles that are haphazardly parked before redistributing them to high-usage areas such as near MRT stations and malls.

Armed with tools such as a hex keys, pliers and cleaning solution, they also check bicycles for defects, conduct minor repairs and routine maintenance of the fleet, including tightening the brakes, oiling the chains and metal parts, and disinfecting the seat as well as handlebars.

Bike marshals are the first to respond to cases of bicycles being damaged or parked indiscriminately. They say hot spots for such cases include parks and industrial areas. 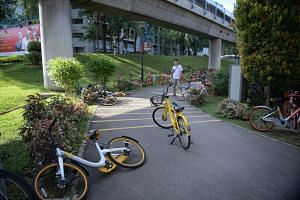 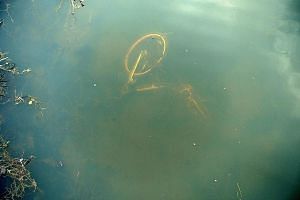 Parliament: Bicycle parking spaces to be provided near most homes and key facilities

SG Bike operation supervisor Syed Al-Syahab, one of seven full-time patrollers hired by the company, goes around Bedok with a backpack containing a poncho, pliers, lubricating oil, brushes, cleaning solution and cloth, among other things.

When ST tagged along last Thursday morning, two bicycles were illegally parked outside a coffee shop at Block 211, New Upper Changi Road - a mere 40m away from a designated parking space. After pushing the bicycles to the proper parking area, Mr Syed - who works from 9am to 6pm, six days a week - gave the bikes a thorough wipe-down and checked for faults.

"The bikes don't magically clean or arrange themselves. There are people who check them and maintain them in good condition," said Mr Syed, 26, who has come across damaged locks, broken chains and muddy tyres in the six months that he has been with SG Bike.

"We pamper these bikes, just like they are our own. So, it can be heartbreaking when they are abused."

For bicycles that are in need of major repairs, Mr Syed informs his head office, which then sends a logistics team down.

Mr Syed does not know why some people abuse the bikes, but believes his presence in the neighbourhood deters such behaviour. "People know there is a familiar face taking care of the bikes," he said.

"Our patrollers are our eyes on the ground. The technology we have can only tell us so much," he said.

Some operators have stringent criteria for bike marshals. For instance, they have to be adept with bicycles and physically fit.

The job can also be tough as marshals work in all-weather situations.

Mr Christopher Hilton, Ofo's head of policy and communications for South-east Asia, said the marshals "work tirelessly" daily to redistribute bikes, ensuring that users are able to get on an available bicycle at their convenience.

Ofo has more than 200 full-time and part-time operational staff, including over 130 bike marshals.

Among them is operations team leader Nicholas Chen. The 27-year-old, who has been with the company for seven months, said a marshal can easily cover 50km to 60km a day, often by riding the bikes to the right parking areas.

Last Tuesday, new laws were passed to regulate bicycle-sharing operators and users of the bicycles.

Users who are caught parking their shared bicycles illegally three times in a calendar year will be barred temporarily from renting such bicycles from any operator. They will also not be allowed to end their rental sessions if they fail to return the bikes to a designated parking zone - meaning they will have to continue to pay.

Operators shared that the new laws will ensure that users will think twice before parking the bicycles indiscriminately. But they believe education on proper cycling etiquette is still the way to go.