SINGAPORE - A panel tasked with developing a set of rules to govern mobility devices has recommended that bicycles be allowed on all footpaths.

All personal mobility devices (PMDs), except electric bicycles, should also be allowed on the pavement, but with a speed limit of 15kmh, the panel said. This includes kick scooters, electric scooters and unicycles.

Currently, cycling is legal only on footpaths in Tampines town - cyclists riding on the pavement elsewhere can be fined $30 for the first offence.

Its recommendations cover three broad areas - rules and a code of conduct for users; the types of devices to be allowed on footpaths, cycling paths and shared paths; and the criteria for devices that are allowed in public spaces.

These guidelines are another step in the Government's move towards a car-lite nation. 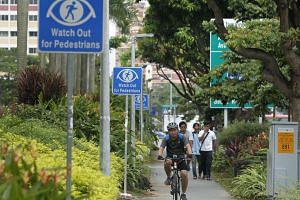 Observers have called for a clear set of rules and norms for cycling, on top of providing more infrastructure for bicycle users.

Said Dr Faishal: "The panel focused on developing a set of rules and a code of conduct which we believe are practical, clear, fair and, most importantly, safeguards the safety of all users."

He noted that in a small island such as Singapore, it is not possible to maximise everyone's interests and space.

"However, if we can build up a culture of graciousness and safety, we will be able to better take care of everyone's needs," he said.

The panel's recommendations, if accepted by the Government, mean commuters using conventional bicycles will be able to ride on footpaths, shared paths and roads.

Those on scooters or mobility aids such as motorised wheelchairs will be able to go on both footpaths and cycling paths, while those on electric bicycles can only ride on cycling and shared paths, or on roads. 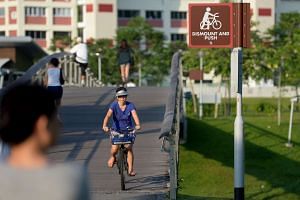 The panel, which was set up last July, also proposed registering electric bicycles so it is easier to take action against errant riders and those who illegally modify their bicycles.

A cap on the speed limit on cycling and shared paths was also proposed - 25kmh.

Also suggested were the physical specifications that all devices must follow to protect vulnerable users.

For instance, the weight of each device should not exceed 20kg.

These criteria will reduce the risk of serious injuries should there be collisions, and allow PMDs to cross each other safely on most footpaths, the panel said.

Motorised devices should have a maximum speed of 25kmh, so they do not exceed the speed limit on paths.

On the code of conduct, the panel stressed that PMD users must give way to pedestrians on footpaths and shared paths.

They should ride at a speed that is not too fast compared to others sharing the path, and be prepared to stop and dismount at areas with high pedestrian traffic. At pedestrian crossings, they have to stop and look out for oncoming traffic.

All devices must be equipped with a white light in front and red light at the back, which must be switched on at night.

In a statement on Thursday, the Transport Ministry said it will study the panel's recommendations and issue a response in due course.