SINGAPORE - Find, scan and cycle. This is what bicycle-sharing services tout. The convenience of grabbing a bicycle practically anywhere and returning it near your destination all through a handy app.

Lured by the promise of not having to make a U-turn to return my bicycle after an arduous night of cycling, I decided to try them all out.

Finding the oBike proved to be a breeze as the larger silver and yellow bicycles were practically everywhere around Tampines, even in a small park. On the other hand, I found only one Ofo and one Mobike in the vicinity.

The size of the bike played a huge factor. I struggled with one of the bikes, which had an especially tiny frame, feeling like an adult who stole a child's ride.

At $1 for every half an hour, the oBike proved to be the priciest. The others start at 50 cents. 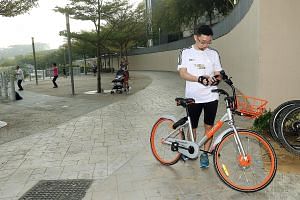 oBike was launched in Singapore in January this year, with Ofo and finally Mobike subsequently sharing a piece of the pie.

But after riding all three bicycles, only one stood out as the clear winner. Which was it? Watch the video to find out.