SINGAPORE - An autonomous scooter designed by a team of researchers in Singapore is now ready to go on the market.

It could be deployed for use in areas such as within hospitals, tourist attractions and university campuses, if plans come to fruition.

It would also be a safer alternative to current e-scooters, which have been a cause for concern, a researcher involved in the project said.

The scooter is one of the four variants of autonomous vehicles that are being worked on by the Singapore-MIT Alliance for Research and Technology Future Urban Mobility (Smart FM) research group, which is MIT's research enterprise in Singapore.

It was on show to the public at Suntec City, as part of Smart's exhibition at the 26th Intelligent Transport Systems World Congress earlier this week.

In an interview with The Straits Times on Tuesday (Oct 22), Smart FM collaborator, Dr Marcelo Ang, said while the device is branded as a scooter, it will be officially classified as a personal mobility aid as opposed to being a personal mobility device (PMD).

This means that the device will not have to conform to restrictions in terms of device weight and width in Singapore, and will have a maximum speed of only 10kmh.

Dr Ang said the device will be safer than traditional e-scooters due to the safety features built into it.

“We have all the sensors around it that see everything,” he said.

“If we put the same technology in PMDs, it will prevent accidents... it’s similar to the driver assistance systems for cars.”

He said the group is looking for opportunities to commercialise the scooter even as work to improve it continues.

"It's all a matter of linking up with manufacturers who are able to build it for us and commercialise it," he said.

Using the Suntec City exhibition centre as a reference point, he said: "It's ready now in the sense that within this place, it can go from any point here to any point anywhere else.

"It may not move very fast, it will get stuck sometimes but it can move once the path is clear." 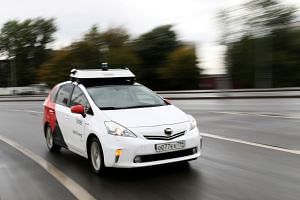 Singapore will not rush into new tech for transport: Khaw Boon Wan

Since then, it has been upgraded to better avoid obstacles and move in dynamic and crowded environments, said Dr Ang, who is also acting director of the Advanced Robotics Centre at the National University of Singapore.

The scooter weighs about 50kg, runs on battery power and has a maximum speed of about 15kmh. It can travel about 20km on a full charge.

It is equipped with an advanced navigation software, cameras and a pair of Lidars - which bounces lasers off objects - to help it move around without bumping into obstacles.

A map of the area it is operating in will be uploaded into the scooter's system for it to navigate itself. Users can select a location within the specified area to head to and the scooter will then make its way there without the user having to steer it.

It currently costs about $18,000 to build one autonomous scooter, but Dr Ang said he hopes that the cost can eventually be brought down to below $1,000 when it is mass produced.