Three years after ComfortDelGro Corp raised its retirement age to 67, the transport giant sees no downside to having older workers.

In a sector where stamina, alertness and vigour are prized prerequisites, ComfortDelGro has found its older workers not wanting.

In response to queries from The Straits Times, its head of human resource, Ms Daisy Chan, said this group is not more prone to absenteeism, mishaps or poor performance. In fact, older workers "possess a strong sense of commitment and work ethics, which we hope younger colleagues can emulate".

"Older workers are also valuable in mentoring and coaching younger workers and in transferring knowledge to augment the training and developmental efforts of the company."

ComfortDelGro first raised its retirement age from 62 to 65 in 2012. A year later, this was raised to 67. This also applies to workers at local subsidiaries such as SBS Transit and Vicom.

Yesterday, rival transport operator SMRT announced that it was extending the re-employment contract age for its bus captains to 69. 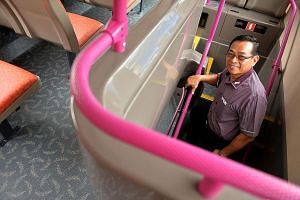 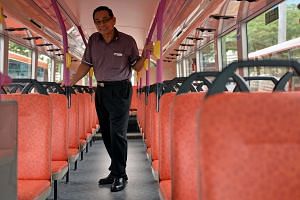 Ms Chan said raising the ceiling is a "win-win situation".

"For the employees, raising the retirement age enables them to keep active while being able to support themselves financially," she said.

"As an employer, we see value in continuing to tap on the experience, knowledge and skills, maturity and reliability of older workers to strengthen our workforce capabilities."

Also, the transport industry has long found it hard to hire and retain Singaporean workers.

To encourage staff to keep working beyond 62, ComfortDelGro does not reduce their salaries, bonuses and benefits as long as their job scope is unchanged.

And even after they turn 67, workers who are medically fit are offered yearly contracts.

He is in charge of making sure bus drivers - many years younger than him - are physically fit to go on the road each day.

ComfortDelGro chief executive Kua Hong Pak leads by example: He is 72, and still keeps a hectic schedule in Singapore as well as in the group's overseas markets.

Asked if the group would extend its retirement age even further, Ms Chan said: "We are always open to considering policies that result in a win-win situation for both our employees and the company."

NTUC deputy secretary-general Heng Chee How has lauded ComfortDelGro's stance, saying: "It's not a small company, and so it's a significant move."

Mr Heng said other businesses should look at taking similar steps, if not company-wide, then perhaps for certain jobs within the firm.

A version of this article appeared in the print edition of The Straits Times on August 30, 2016, with the headline 'Age not a disadvantage for transport operator'. Subscribe
Topics:
More
Whatsapp Linkedin FB Messenger Telegram Reddit WeChat Pinterest Print Purchase Article Copy permalink