SINGAPORE - First conceived in 2013, the Singapore-Kuala Lumpur high-speed rail (HSR) has been three years in the making.

Singapore and Malaysia on Tuesday (Dec 13) signed a historic bilateral agreement to build a high-speed rail line with a target to have the trains running by Dec 31, 2026.

The rail project has been billed as a "game-changer" that will boost connectivity, strengthen economic ties and forge closer ties between people of both countries

Here are 10 points to note about the HSR project:

The Express Service, which links Singapore and Kuala Lumpur, is targeted to commence by Dec 31, 2026. 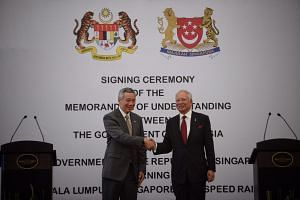 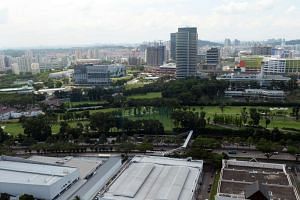 The line will consist of eight stations, seven of which will be in Malaysia.

The Singapore station will be located at Jurong East, where Jurong Country Club is currently located. 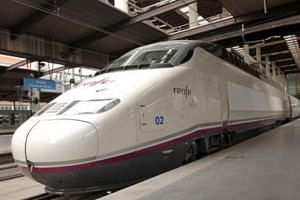 From The Straits Times Archives: Six of the best high speed railway systems in the world

The project will involve the construction of a brand-new line with dedicated tracks, which will allow trains to reach a maximum speed in excess of 300kmh; 335km of the track will be set in Malaysia, with the Singapore stretch spanning 15km.

The HSR is expected to trim travel time to just 90 minutes, compared with the four to five hours needed to travel by road between Singapore and Kuala Lumpur.

There will be an express service between the two terminal stations - Jurong East in Singapore and Bandar Malaysia in Kuala Lumpur; a shorter shuttle service connecting Singapore and Iskandar Puteri in Johor; and a domestic service linking the seven stations in Malaysia.

The three services will be helmed by two different operators, OpCo International and OpCo Domestic.

The domestic service will consist of stations within Malaysia only, from Kuala Lumpur to Iskandar Puteri stations.

Having two different OpCos will allow the HSR to better cater to the different needs of their passenger profiles.

OpCo Domestic will also give Malaysia more flexibility to regulate its own internal service.

The express and shuttle services will be given scheduling and operational priority over the domestic service.

6. Each country is in charge of its own stations and infrastructure

The Singapore and Malaysia governments will be responsible for developing, constructing and maintaining the civil infrastructure and stations within their own countries.

This will be undertaken by MyHSR Corporation in Malaysia and the Land Transport Authority (LTA) in Singapore.

7. Implementation of a Bilateral Committee

A bilateral committee will have oversight over all matters that may affect the express and shuttle services.

A working-level joint project team will also handle all matters that require coordination and joint engagement between Singapore and Malaysia.

Both nations have agreed that the Singapore and Malaysia Customs, Immigration & Quarantine (CIQ) facilities will be co-located at three locations - Kuala Lumpur, Iskandar Puteri and Singapore.

International-bound passengers will need to go through CIQ clearance by both Singapore and Malaysia authorities only at the point of departure, ensuring swift and seamless travel.

9. Bridge to link Singapore and Malaysia

The 350km, eight-station line will link both countries via a bridge over the Strait of Johor that is 25m above water level.

On Jan 4, 2017, the LTA and Singapore Land Authority that the land on which the Raffles Country Club in Tuas sits on will be acquired, as it was deemed the most suitable location to run the at-grade HSR tracks immediately after the bridge crossing, and to place the tunnel portal leading to the underground tunnels that will take the HSR to its Jurong East terminus.

A HSR siding facility to temporarily house a train near the border will also be located there.

Muar otah, Seremban beef noodles and the first Hello Kitty Town outside of Japan will be more accessible once the HSR is in operation.

The new rail service will be another way for tourists from Singapore to explore lesser-known cities in Malaysia.

Check out The Straits Times' guide on what else to see, do and eat along the planned stops.