SINGAPORE - Some 5,300 private-hire car drivers have undergone a vocational training course but have not passed the test - which means they may be taken off the roads when a licensing regime takes effect from July.

Among them, 3,800 drivers have attempted the test at least once but were unsuccessful, while the remaining 1,500 did not sign up to take the test.

Another 17,700 drivers may similarly have to stop providing chauffeuring services after June 30, because they have not registered for the Private Hire Car Driver’s Vocational Licence training, the Land Transport Authority (LTA) said in a press release on Friday (June 22).

These 23,000 drivers had been given a one-year concession, which ends this month, to provide chauffeuring services - such as for apps like Grab and the now-defunct Uber - while the new vocational licensing regime was phased in.

The LTA said that about 42,900 drivers were granted this grace period, as they had applied for the new licence before July 1 last year.

Among them, 19,900 have attended the 10-hour vocational training and passed the test, the LTA said, adding that the passing rate is 70 per cent.

The Straits Times reported earlier that the authorities had removed questions relating to health and security in the test - subjects which drivers felt were unrelated to their work. These topics, however, continue to be part of the curriculum.

There have been proposals from drivers and at least one Member of Parliament to conduct the test for the new licence not just in English, but also in other major languages, to help drivers clear the hurdle. 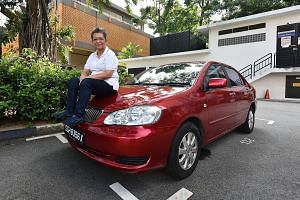 40% of private-hire car drivers - or 23,900 - without vocational licence one month before deadline

The LTA said on Friday: "The provision of chauffeured service puts drivers in contact with a wide range of commuters every day.

"Hence, private-hire car and taxi drivers must be able to speak simple English to communicate effectively with all commuters - both Singaporeans and tourists. Drivers must also be able to read English, so that they can navigate roads and buildings, the names of which are primarily in English."

The authority has encouraged drivers who need help to improve their English to sign up for the Singapore Workforce Skills Qualifications Workplace Literacy Programme, or an equivalent course.

For those who need help with the course content, remedial classes are conducted by the Singapore Taxi Academy and ComfortDelGro Taxi training centres, it added.

Drivers who will give up chauffeuring next month can also approach e2i or Workforce Singapore for employment assistance, the LTA said.