SINGAPORE - Senior Minister of State for Defence Heng Chee How visited the Republic of Singapore Air Force's (RSAF's) detachment in France on Wednesday (June 19), and highlighted the value of training there to Singapore's pilots.

During the visit to Cazaux Air Base hosted by Chief of Air Force, Brigadier-General Kelvin Khong, Mr Heng said that being able to train alongside a "very professional" Air Force, such as the French Air Force, spoke volumes of the practical value of the collaboration between the two countries.

He noted that the detachment is part of a strategic partnership between Singapore and France, and said that a strong and capable defence must include a strong air force, which has the ability to train its pilots well.

"Our pilot trainees have been able to exercise and train and hone their skills in these skies - huge expanse of airspace. This gives us the edge. This gives us the ability to develop and improve upon the quality and our cutting-edge in the air," added Mr Heng in a statement by the Ministry of Defence on Thursday.

The RSAF has conducted flying training in France since 1998. Cazaux Air Base is home to the 150 Squadron and its personnel, including instructor pilots, air force engineers, aircrew trainees and support staff.

Mr Heng was in France at the invitation of the French Ministry of the Armed Forces to attend the 53rd International Paris Air Show, which began on Monday. 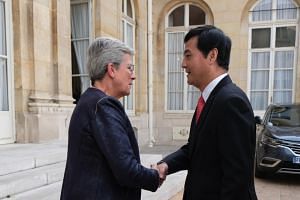 At Cazaux Air Base, about 60km from the city of Bordeaux, he reviewed a parade by the French Air Force, received a brief on the RSAF's training, and met the families of the RSAF servicemen deployed there.

He also boarded the M-346 Advanced Jet Trainer aircraft for a familiarisation ride.

Earlier in the week, he met Ms Genevieve Darrieussecq, Minister of State reporting to the French Minister of the Armed Forces, and discussed geopolitical and security developments.

They also reaffirmed the two countries' commitment to strengthening bilateral defence cooperation in areas such as defence technology, counter-terrorism, and air force and navy cooperation.

It added that these interactions are testament to the strong and broad-based defence relations between Singapore and France, and have strengthened the mutual understanding and camaraderie among personnel of both air forces.