Cars had to change lanes to avoid a tortoise that was crawling ponderously across a three-lane road, holding up traffic, a video on road safety community page Beh Chia Lor showed.

At one point, it appeared to have stopped in the centre of the road, shrinking its limbs and head into its carapace.

The driver of a white car parked on the right side of the road scurried over in the rain to pick up the reptile and drop it on the pavement where it would not be run over.

The video, uploaded on Monday at close to 10pm already had thousands of views less than an hour after it was posted. 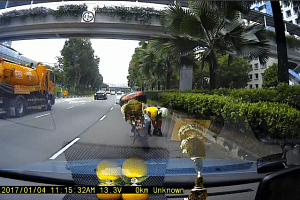 Motorcyclist stops along road in Admiralty to save injured bird

This is not the first time a tortoise has been found crossing Singapore roads.

A video posted in February on Facebook showed another tortoise valiantly attempting to cross the road at an unknown location.

A driver also stopped to rescue the law-abiding animal, which was using a pedestrian crossing.

Other runaway animals, including an ostrich, have resulted in hilarity across the Causeway.