In 1952, Singaporean schoolboy Moez Nomanbhoy found himself the butt of playground jokes at Hale School in Perth, Australia.

Mr Nomanbhoy, now 80, recalls: "I was the only one among them with black hair. So whenever I cut it they would say, 'Black merino sheep has cut his hair'. "

His father, spice trader Abbas Nomanbhoy, had some money in Australia and so sent him there for further studies. The son recalls: "He said 'Go and use that money for your school fees. Study there and fight your own battles'. "

So did he fight those who taunted him? "No," he muses. "If I got arrogant with them, they would mock me more. So I let them do what they wanted and finally it all fizzled out."

He still counts those classmates as friends; one among them even flew to Singapore last year to attend the centenary celebrations of his company, Nomanbhoy & Sons.

Mr Nomanbhoy's family is among the earliest Dawoodi Bohras to have settled in Singapore.

The Bohras, whose roots are in India, are a deeply religious sub-sect of Islam who are traditionally traders. They are led by a spiritual leader, currently His Holiness Syedna Mufaddal Saifuddin Saheb.

When Syedna Mohammed Burhanuddin, the predecessor of the current leader, died in India last year, the country flew its state flags at half-mast to honour him. 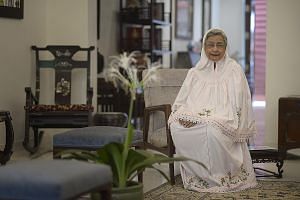 'Miracle' baby was a joy and disappointment 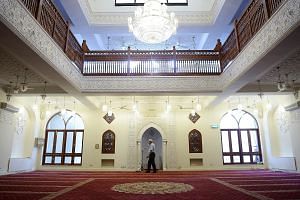 The late Syedna's father, Syedna Taher Saifuddin, played an integral part in the Nomanbhoys' life in Singapore. In 1892, Syedna Taher sent Mr Nomanbhoy's grandfather, Nomanbhoy Abdeali, to Singapore to manage a branch of the trading company, C A Mohammed.

It had other branches in Penang, Bombay, Calcutta (now Mumbai and Kolkata, respectively), Hong Kong and Shanghai.

All seemed well with C A Mohammed until 1914, when it closed down inexplicably, the younger Mr Nomanbhoy says. His grandfather was undeterred and, after a brief return to India, came back to Singapore that same year to try his hand at the business again.

He set up his own firm at 16 Malacca Street, under his name Nomanbhoy Abdeali, and traded in pepper from Sarawak, assorted spices from Indonesia and cloves from Madagascar and Zanzibar.

In 1923, the business became Nomanbhoy & Sons when he retired and handed over the reins to Mr Nomanbhoy's father, Abbas, with the words: "I'm leaving you $50,000 to continue the business. Try to multiply the money." The patriarch then went back to India.

Mr Nomanbhoy, his parents and two siblings were recalled by the patriarch to India in 1943, during the Japanese Occupation. When they came back to Singapore in 1946, his father had to sell the family villa in Orchard Road, where Paragon now sits, to restart the business,

In 1955, Mr Nomanbhoy finished his studies, joined his father in the business and was paid $50 a month for his efforts. "Once a month, I felt down at heart," he recalls. " I worked so hard but couldn't enjoy life. Sometimes I asked myself, 'What was this?' But then I pitied my father; if I walked out, who would help him run the business?"

Five years later, when he married his bride Safiya - a union arranged by his grandfather - his father finally increased his allowance to $150.

Mr Nomanbhoy has since grown the company into a 24/7, ever-expanding multi-million dollar concern. In 1955, he sold 500 tonnes of cloves a year to the United States; now he sells it 3,000 tonnes a year.

Underpinning his business are the Bohra values of honesty, reliability and thrift.

"What we say we will do, we must do," says the feisty, diminutive man, who also chairs the Bohras' mosque management board here and deputises for the community's local leader, called the Aamil Saheb, when the latter is away.

Mr Hanif, an economist who joined the business in the 1980s, muses: "We are strict in business, which is an extension of our religious beliefs and values.

"But from the 1990s, we had to develop a whole new system of contracts because nobody did business with just a handshake any more."

His father insists: "I still think a handshake works but, these days, people want something in writing."

Mr Hanif's eldest son Aqeel, 26, has joined them too, after running errands for the firm since he was 14.

Mr Aqeel, a University of Sydney alumnus, recalls: "I couldn't believe I was the only 14-year-old going to the office when all my friends were going out."

He now trades easily with clients, some of whom have been doing business with his family for 60 years.

However , he still has some way to go. Recently, when he suggested that the family open a representative office in Zanzibar, he was vetoed by his elders who did not want to spoil the goodwill with their long-time suppliers there.

"Aqeel is now taking the early morning calls from America that I used to take," says Mr Hanif.

"Sometimes he will come into my bedroom at 3am and ask me, 'What shall I do? Shall I sell?' and my wife will say, 'Will both of you please get out of the room'. "

The Burhani mosque has for the first time allowed a media outlet to film inside it. We have also filmed scenes of faiz, the daily food distribution process, to the 1,000 or so Dawoodi Bohras here, which began two years ago.

A version of this article appeared in the print edition of The Straits Times on October 15, 2015, with the headline 'Trading on honesty and reliability'. Subscribe
Topics:
More
Whatsapp Linkedin FB Messenger Telegram Reddit WeChat Pinterest Print Purchase Article Copy permalink