SINGAPORE (BLOOMBERG) - The end of the US-China trade war may throw up a surprise winner among Asia-Pacific currencies other than the yuan: the Singapore dollar.

While traders have highlighted the Australian dollar, the Korean won or the Taiwan dollar as beneficiaries of a truce given the nations' direct economic reliance on China, one metric shows that the Singapore dollar has the strongest link to the yuan among 12 currencies looked at by Bloomberg.

About 41 per cent of fluctuations in the Singapore dollar in the past two years could be explained by changes in the offshore yuan, higher than 26 per cent for Taiwan and 22 per cent for the Australian dollar, according to a correlation gauge.

That's because trade makes up an outsized share of growth for the city-state, which saw exports slide the most in more than two years in January amid the ongoing tariff tensions.

"The Singapore dollar is driven more by the global economy," said Mr Toru Nishihama, an economist at Dai-ichi Life Research Institute Inc in Tokyo. "Should the trade war go away, Singapore would benefit from a sharp recovery in trade volumes in Asia."

While China is also the biggest export market for countries including Australia, South Korea and Taiwan, their currencies are affected by other drivers too.

The Australian dollar has been dented by a property slump, while concerns over a demand slowdown for semiconductors and phones have sapped the won and the Taiwanese dollar. 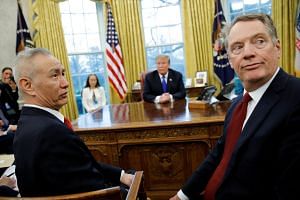 Can Asean cope with the 'trade war'?

Malaysia's ringgit, which has the second-highest correlation, is also affected by oil given its crude exports.

On top of that, the Monetary Authority of Singapore manages the local currency against a basket of peers, with analysts saying that the proportion is closely related to trade links. China is also the city-state's biggest trading partner.

Asian currencies have rallied in the past week as hopes of a trade breakthrough intensified after US President Donald Trump said there has been "substantial progress" in talks, while also delaying a planned increase in tariffs on Chinese goods.

That said, the upside for Asia's currencies may be limited as "markets are already pricing in a lot of the optimism", said Ms Divya Devesh, head of Asean and South Asia FX research at Standard Chartered Bank in Singapore.