SINGAPORE - Singapore could be among the first in the world to roll out smart letterboxes nationwide, with features such as identity authentication for mail retrieval.

SingPost is in "deep discussion" with government agencies on such smart letterboxes and other infrastructure upgrades that will make receiving mail and parcels more convenient and efficient, said its Singapore head and chief executive of postal services Vincent Phang.

But for a start, it will be launching a new product that will allow customers to be notified when an item is delivered to their letterbox.

This is among a number of initiatives the postal service provider will be introducing this year, including role specialisation for postmen and letting residents rate them, in a bid to win back the public's trust after a spate of service lapses.

A new feedback channel will let residents read short biographies of their neighbourhood postman and leave a rating and comments.

"The main motive is to have community engagement between postmen and residents, to put a face to a name," Mr Phang told the media when he announced the initiatives on Friday (May 31) at the SingPost Centre.

The ratings will not be tied to incentives for now, he added.

A microsite will be launched in July, when the feedback programme will be on trial in Bukit Timah and Yishun. It will be rolled out nationwide in October, and residents will be given QR codes that can be scanned for quick access to the site.

The new "trackable mail" product due to roll out in the same month will provide an alternative to registered mail, which requires a signature to acknowledge receipt.

"A good proportion of customers that require high confidence deliveries use registered articles... a tracked letterbox product would essentially improve on that experience. So if it goes into the letterbox it's scanned, and there's verification that it's delivered," said Mr Phang, 45, who joined SingPost in April.

Shifting some demand to this service would lead to fewer overall doorstep deliveries that postmen need to make, and fewer missed encounters, he added.

A surge in e-commerce volumes had strained the mail system and resulted in heavier loads and more doorstep deliveries for postmen, SingPost said in February amid a series of high-profile delivery problems and two separate fines from the authorities for failing to meet service standards.

International postal standards allow for packages that are larger than letterboxes here to be sent through the postal system. This means if an item cannot fit in a letterbox because it is too large or the box is cluttered, the postman has to make a doorstep delivery.

To make deliveries more efficient, postmen will specialise in either letterbox or doorstep deliveries, instead of doing both currently. This will entail a pre-sorting process "to segregate what's doorstep and what's letterbox", said Mr Phang.

Roughly two-thirds of SingPost's more than 1,000 postmen will focus on letterbox deliveries. Together with the current doorstep delivery hours of 9am to 6pm being extended to 9pm beginning in August, delivery success rates will hopefully increase, said Mr Phang.

Of the three million mail items sent for delivery daily, about 0.5 to 0.7 per cent fail to be delivered. 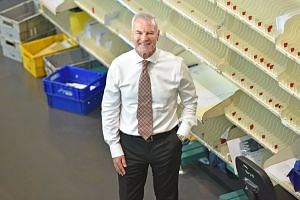 "Some are clearly service issues, but the truth is that the vast majority is stuff out of our control," he said.

Incomplete addresses, for example, account for between 30 and 40 per cent of unsuccessful deliveries daily.

SingPost's postal products will also be streamlined to aid the new workflow.

To improve security and reduce human error, SingPost is working with regulators to replace all 60,000 HDB letterbox masterdoors with ones that must be secured before the key can be removed.

There have been early signs of improvement in service levels after immediate measures such as hiring more postmen were put in place from February, said Mr Phang.

The firm has hired 240 new postmen to meet demand and address attrition rates, as many senior postmen are set to retire. While most of the new hires are foreigners, SingPost hopes to attract more Singaporeans to the job by adjusting the pay and job scope.

A round of "significant adjustments" have been made to postmen's wages, said Mr Phang, though he declined to reveal the amount. It was reported in February that the starting pay for a postman was about $1,600 a month, excluding other incentives.

The new initiatives come as part of a longer-term review of SingPost's operations, which include discussing with the authorities the possibility of making letterboxes bigger to accommodate the changing profile of mail items.

Private property letterboxes, which are unregulated, also pose challenges for postmen as they are not standardised and some are in bad shape, said Mr Phang.

"If you think about letterboxes... that entire infrastructure hasn't changed in decades."

The future delivery system could incorporate some configuration of parcel lockers, smart letterboxes and other technology-enabled systems.

"We're having discussions with various stakeholders and convenience is a key point that keeps coming up. We have a fantastic opportunity to engineer something," he said.

"I do foresee that in a country like Singapore, there's potential for us to have all deliveries tracked. Just think of a day that without some level of authentication you cannot retrieve that letter from a letterbox.

"All that is within our grasp...whether it's cost-effective is another thing, but we certainly have to discuss some of these areas to build the infrastructure so it can sustain the future."