SINGAPORE - Spending by tourists in the first half of this year did not keep pace with the number of arrivals, which rose 1.3 per cent to reach 9.3 million.

Visitors to Singapore spent $13.1 billion between January and June, a 3 per cent decline compared to the same period last year, according to figures released by the Singapore Tourism Board (STB) on Wednesday (Oct 30).

They spent less on accommodation (down 13 per cent), food and beverage (down 5 per cent) and sightseeing, entertainment and gaming (down 2 per cent).

In good news for retailers, however, spending on shopping grew by 2 per cent to reach $2.8 billion. A miscellaneous category that covers things such as airfare expenditure on Singapore-based carriers, local transportation and medical tourism also grew by 1 per cent to $3.7 billion.

Gazetted hotel room revenue, meanwhile, grew 1.7 per cent year on year to about $1.9 billion. While the average occupancy rate held steady at about 85 per cent, the average room rate and revenue available per room dipped by 0.8 per cent and 0.9 per cent respectively.

The United States registered the highest growth in both categories, with some 361,000 visitors who spent $407 million, which was 11 per cent more than the same period last year.

Among the top 10 markets, Americans spent the largest proportion on accommodation, while visitors from China spent the most on shopping and tourists from the Philippines dedicated more of their budget to food and beverage.

STB's director for digital transformation Poh Chi Chuan attributed the overall decline in tourism receipts between January and June to lower spending in the leisure and business events sectors. 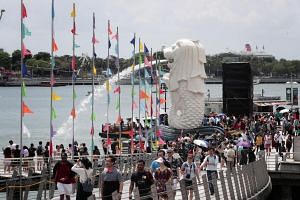 Uncertainties in the global economy and currency fluctuations against the Singapore dollar continue to encourage more cautious spending by visitors, said Mr Poh.

More visitors spent less time here, with more also choosing to stay in lower-tier hotels or with friends and relatives, leading to lower spending on accommodation, he said.

While tourist arrivals and receipts hit record highs for the third straight year last year, spending grew by just 1 per cent, its poorest performance since 2015.

Visitor arrivals to Singapore this year are continuing to rise, with 12.9 million recorded between January and August this year, a near-2 per cent year-on-year increase, said Mr Poh.

Headwinds are likely to affect Singapore's tourism performance this year, however, particularly in the area of spending, he said.

The STB's efforts to combat this include diversifying source markets and an array of upcoming attractions, including a new tourism development in the Jurong Lake District.

"STB will continue to work closely with industry stakeholders to encourage day-trippers to extend their stay in Singapore, which will contribute to higher per capita expenditure," said Mr Poh.