SINGAPORE - The Christchurch terror attacks are a reminder that tough laws are needed to curb the spread of hate speech, which is not being tackled adequately by online tech companies and platforms, said Home Affairs and Law Minister K. Shanmugam on Tuesday (March 19).

He also disclosed that he will be tabling a motion in Parliament to discuss hate speech and race and religious relations in early April.

"We will have a debate in Parliament on structuring race relations and our approach to it... (We will) have views expressed, set out the Government's position comprehensively and contextualise it," said Mr Shanmugam.

"I think this will allow us as a society to see where the lines ought to be drawn, and whether they need to be redrawn."

He was speaking to reporters on the sidelines of the 15th Religious Rehabilitation Group (RRG) retreat at the Shangri-La's Rasa Sentosa where he addressed Muslim community leaders.

During his speech, Mr Shanmugam referred to the shooting last Friday at two mosques in Christchurch, New Zealand, that left 50 people dead and 50 others injured, noting that the gunman had posted a 73-page manifesto online before carrying out the attacks.

"(It had) far-right, hate speech, anti-Muslim beliefs, and he live-streamed the attack, and he aimed for maximum deaths and damage," said Mr Shanmugam.

This is one of the reasons why Singapore has tough laws and a tough approach against hate speech, he added.

He also said: "Online tech companies and platforms don't do enough to take down anti-Muslim messages. In Singapore, we take a very no nonsense approach even though we get criticised for it."

Even as the attacks in Christchurch received worldwide condemnation, the "ugly head of far-right Islamophobia" was seen in the form of anti-Islam comments made by Queensland Senator Fraser Anning soon after the incident, said Mr Shanmugam. 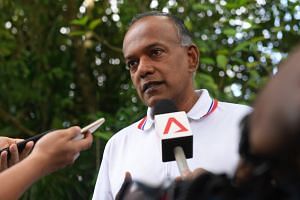 “If it had been in Singapore, he would have been arrested. We don’t allow this," said the minister, adding that "thankfully" many people also criticised the far-right independent Australian politician's comments.

Mr Shanmugam added that Singapore makes no apologies for its approach in tackling hate speech.

"So we make no apologies for the approach we take and we will continue to take a tough and strict approach, but a fair approach, across all communities.

"That is, I think, the only way to make sure that everybody can go about their businesses, do what you want, achieve their full potential, profess whichever faith you want, pray to whichever god you want,”  he said.

“That’s your right, and we protect that right.”

However, tough laws alone do not create the environment we have in Singapore, said Mr Shanmugam. It involves collaboration from the communities and the Government.

During his speech, he thanked the RRG for its continued support and help within the Muslim community and also across other communities.

But he said that while Singapore has come a long way in building its racial and religious harmony, "we are not done yet" and it needs to be continuously worked on.

Set up in 2003, the RRG trains religious teachers to counsel those who have been influenced or misguided by radical teachings. It also conducts workshops on countering extremist ideology in schools and mosques.

Mr Shanmugam said he was glad to see the different faith groups in Singapore releasing statements condemning the Christchurch attacks and expressing solidarity with Muslims in Singapore.

He said strong inter-community relations and communal harmony did not happen by accident, adding that "if you leave people on their own, inevitably they will emphasise on divisions and not the commonalities".

"So we have been and we have to continue to actively work on bringing people together. Without that, it will not work. Who is the we? It is all of you. Every community, every group, every religious leader and, of course, the Government. All working together to achieve this," he said.