SINGAPORE - It is early days yet to judge if the new Pakatan Harapan (PH) coalition will rule Malaysia better than Barisan Nasional, with much of the three-month-old government's efforts focused on blaming the former administration that governed for more than six decades.

"I have not seen much by way of clear, succinct policy discussion apart from GST (goods and services tax). Right now, all the energy is on scapegoating... At some point, the Pakatan government has to actually govern," said Professor Joseph Liow, dean of Nanyang Technological University's (NTU) College of Humanities, Arts and Social Sciences and S. Rajaratnam School of International Studies.

He said the new administration's efforts to recover assets allegedly purchased with funds stolen from 1Malaysia Development Berhad (1MDB) - including a US$250 million (S$344 million) superyacht and a Bombardier jet grounded at Singapore's Seletar airport - "makes for good entertainment", but there needs to be more governing.

Prof Liow was one of three panellists speaking at The Straits Times Global Briefing on Monday (Aug 13) titled Malaysia: 100 Days After The General Election, which was presented by OCBC Premier Banking.

Malaysia's Parliament abolished the GST statute last Wednesday. The 6 per cent tax introduced in 2015 was effectively scrapped in June, after the PH government swept to power in May.

Removing the GST was one of 10 pledges that PH promised to deliver on within its first 100 days in power, with the milestone falling on Friday.

The pact has not done badly on its campaign promises, said panellist Selena Ling, who is OCBC Bank's head of treasury research and strategy.

"Six out of 10 (pledges) are either fulfilled or in the process of being fulfilled. The remaining four are being postponed... due to the fact that basically they are taking a very hard look at how to boost their fiscal finances now that they have scrapped GST," she said. 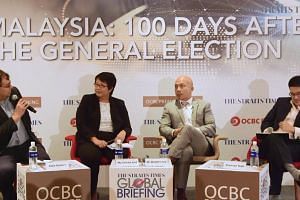 The government has made some headway with stabilising petrol prices through subsidies, reviewing mega projects with foreign countries and setting up commissions of inquiry to reform governance at troubled state firms like 1MDB and national land agency Felda, she said.

But it has not made progress on other promises, such as abolishing Felda farmers' debts, deferring study loan repayments amounting to RM39 billion (S$13 billion) and implementing a medical care scheme for lower-income groups.

The government's ability to keep expenses within its fiscal deficit target of 2.8 per cent of gross domestic product will be scrutinised closely, Ms Ling said, now that there is a "RM20 billion to RM30 billion funding gap" after GST revenue fell to zero from June, and with the GST to be replaced by a new sales and services tax only from next month.

"The increase in deficit (for 2019) may be about a few billion ringgit, or half a per cent of GDP," noted The Straits Times' Malaysia bureau chief Shannon Teoh, who also spoke at the forum.

Still, Malaysia's economic growth looks to be on track, with second-quarter GDP growth numbers - out on Thursday - expected to ease to 5.2 per cent, from 5.4 per cent.

Prof Liow noted that the multicultural PH also faces the delicate task of crafting a progressive Malay agenda that does not sideline other communities, and handling the "ketuanan Melayu" (Malay lordship) patronage system that has for decades dispensed state largesse via contracts awarded to the country's dominant ethnic group.

"There are a lot of expectations in the upcoming review of the 11th Malaysia Plan (that) they would probably try and reform some of the GLCs", said Ms Ling, referring to government-linked companies. "A lot of the contracts that were being given as part of the largesse... I think that is about to change."

Mr Teoh said the flashpoints to watch for in Malaysia's political landscape are internal polls next month for Parti Keadilan Rakyat (PKR), which has the most number of MPs in PH, whether Prime Minister Mahathir Mohamad will hand over leadership to Datuk Seri Anwar Ibrahim in 2020 as promised, and the Sarawak state polls - a key gauge of voter sentiment - which must be held by 2021.