TOKYO • Veteran diplomats jousted at a public forum here over the question of whether Japan is sufficiently invested in South-east Asia, amid the country's concerns about China's growing influence in the region.

Singapore's Ambassador-at-Large Tommy Koh called on Japan to return to Asean as its top investor, as it was in the 1970s and 1980s.

"You were Asean's No. 1 trade partner. Now you are No. 4. You were also No. 1 in foreign direct investments. Now you are not. You have lost so much ground in South-east Asia," said Professor Koh.

However, Japanese diplomat Yoshiji Nogami disputed this, saying: "Tommy is wrong. Japan is already back in South-east Asia."

He said Japan's foreign direct investment in the region is already overtaking what it spends in China.

The spirited debate ensued after Japanese academic Tsutomu Kikuchi at the event called for the creation of a new economic zone in the Bay of Bengal to replace China as a new market for investments.

It invited a riposte from Prof Koh, who said Singapore's attitude is that the Chinese market is very important to South-east Asia, and that it is "not going to go away".

You were Asean's No. 1 trade partner. Now you are No. 4. You were also No. 1 in foreign direct investments. Now you are not. You have lost so much ground in South-east Asia.

SINGAPORE'S AMBASSADOR-AT-LARGE TOMMY KOH, calling on Japan to return to Asean as its top investor.

He added: "If you are looking to reduce dependence on China, Japan should return to South-east Asia."

Diplomats, academics and government officials from Japan and Singapore gathered in Tokyo yesterday for the 13th Japan-Singapore symposium, which was started 21 years ago as a platform for candid sharing of views between both countries.

Keynote speakers stuck to the theme of Japan-Singapore Partnership: Ascending A New Peak.

Former Cabinet minister Yasuhisa Shiozaki, secretary-general of the Japan-Singapore Parliamentarians' Friendship League, called the relationship "a ray of light in the dark".

Senior Parliamentary Secretary for Foreign Affairs Tan Wu Meng outlined how the two "close and natural partners" have many opportunities to work together, such as in providing aid to developing countries, meeting infrastructure needs in the region and deepening collaboration in areas such as e-commerce.

The discussion, however, then veered towards the elephant in the room. 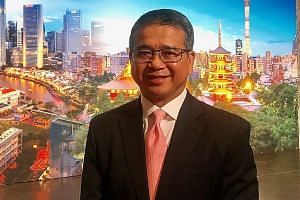 Dr Kikuchi, who is vice-president of Aoyama Gakuin University, criticised China for often "acting contrary to our expectations", and for ignoring rules governing international trade and investment.

He called for the creation of a "giant economic zone" comprising the countries ringing the Bay of Bengal, saying: "We need to identify a new market for investments that will replace China."

Calling on Japan to divert its investment dollars to South-east Asia instead, economist Tan Khee Giap noted that Asean is attractive not just in terms of its labour costs, but also its growing middle class as a market. The 10 Asean countries have a combined population of 600 million people, half that of China's, he pointed out. "If Japan comes back to Asean, it will help to balance the dominance of China in the region."

Sounding a note of compromise, SIIA chairman Simon Tay acknowledged that some Asean countries may not have the trained workers or infrastructure that Japanese companies need. But, he added, this is "a happy dispute", saying: "Japan is good at not just investing, but also in training people."

There was also agreement that Asean, for its part, should step up more by signing the Comprehensive and Progressive Agreement for Trans-Pacific Partnership (CPTPP), brokered by Japan. Currently, only Singapore and Vietnam, among the Asean members, have ratified the 11-nation trade pact.

Said Mr Nogami, who is vice-chairman of the JIIA: "Asean is crucial but the response from Asean is limited."

To this, Prof Koh agreed, saying: "Those of us who have already ratified should talk to countries such as Thailand and the Philippines to bring them up to speed. We should get more in Asean to join the CPTPP."