SINGAPORE - The 18-month-old girl who died on Friday after a full-length mirror fell on her inside a fashion store at Jewel Changi Airport was cremated on Sunday morning (Aug 25).

Her mother and other family members went to the Urban Revivo store at about 6am to conduct prayers, The Straits Times understands.

They then headed to Mandai Crematorium, where the toddler's body was cremated at about 8.45am.

The tragedy on Friday had taken place about three hours before the girl and her family were due to fly home to China.

Chinese evening paper Lianhe Wanbao reported that they were scheduled to take a 3pm flight to Xiamen. The Singapore Civil Defence Force responded to the incident at 12.33pm.

The newspaper identified the toddler as Lai Jiaxin, and said she was with her family and a few other relatives when the incident occurred.

According to its report, a few children had knocked down the full-length, stand-alone mirror while playing in the Urban Revivo store. The mirror fell on the toddler, who happened to be standing in front of it.

Police said the child was unconscious when she was taken to Changi General Hospital, where she was subsequently pronounced dead.

The incident is believed to have been captured on closed-circuit television (CCTV) footage, but the video has not been released.

When ST visited the Urban Revivo store at Jewel on Sunday afternoon, the two-storey unit remained cordoned off. 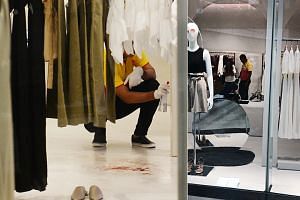 While the lights were on, no employees could be seen inside, and two signs were put up to say the "store is closed".

Urban Revivo, on its website, says it is a Chinese fashion clothing store founded in 2006, with 200 stores in China and across the world, including Europe, North America and Japan.

It has three outlets in Singapore - at Jewel Changi Airport, Plaza Singapura and Raffles City.

When ST visited the outlet in Raffles City on Sunday afternoon, an employee who declined to be named, said that staff had been told to check on their standing mirrors.

"We were told to double check everything in the store yesterday (Saturday) and make sure things were secure," he said.

He added that the standing mirrors in the Raffles City store differ from those in Jewel.

"The standing mirrors here are attached to the clothing racks so they are very stable. I think the ones at Jewel are free standing."

Mr Kenneth Loo, executive director of Straits Construction, said mirrors should be installed such that they are secure enough to not be knocked over too easily - be it the way they are framed or the kind of adhesive used to hold them up.

He declined to comment specifically on the Jewel incident, noting that the facts remain unclear.

"Generally speaking, whenever something like a mirror is installed or mounted, there should be some engineering behind it to allow it to take some kind of impact," he said.