SINGAPORE - The High Court on Friday (Oct 11) said it found Workers' Party (WP) chief Pritam Singh and his fellow Aljunied GRC MPs Sylvia Lim and Low Thia Khiang liable for damages suffered by the Aljunied-Hougang Town Council (AHTC), which is said to have made millions in improper payments under their watch.

High Court Judge Kannan Ramesh said that Ms Lim and Mr Low had breached their fiduciary duty, while Mr Singh had breached his duty of skill and care in the hiring of the town council's managing agent FM Solutions & Services (FMSS).

Here is a timeline of the case:

The WP wins Aljunied GRC and retains Hougang at the General Election. Shortly after, FMSS is formed. AHTC's existing managing agent, CPG, informs the WP it wishes to terminate its contract early.

WP formally takes over the running of AHTC. It formally appoints FMSS as its managing agent on a one-year contract.

WP calls for a tender for managing agent services, and only FMSS submits a bid.

The AGO flags major lapses in governance and compliance, including FMSS co-owners being staff of the town council.

A KPMG audit finds "serious flaws" in the town council's governance and highlights improper payments of $33.7 million to FMSS. 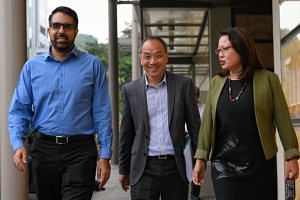 AHTC lawsuit should be capped at $620k, say defendants' lawyers

AHTC appoints an independent panel to review the KPMG report.

The independent panel files a lawsuit against several town councillors, including three WP MPs - Mr Low, Ms Lim, and Mr Singh - saying they have breached their fiduciary duties. The MPs reject the allegations.

The first tranche of the AHTC trial begins, to find out if five town councillors as well as FMSS and its co-owners are liable for the alleged improper payments.

The lawsuit is brought about by AHTC's independent panel as well as Pasir Ris-Punggol Town Council, over claims related to Punggol East constituency.

At this point, it is unlikely that the judgment will affect their position as MPs, as it arises from civil proceedings. The MPs can decide whether to appeal against the verdict.

The case will move on to a second round of hearings to assess and determine the quantum of damages suffered by the town council, and how much it can recover from the MPs.