SINGAPORE - Historian Thum Ping Tjin on Monday (Sept 3) responded to criticism of his meeting with Malaysian Prime Minister Mahathir Mohamad, saying any notion that he is a traitor to Singapore is "ridiculous and unfounded".

Home Affairs and Law Minister K. Shanmugam on Sunday described the conduct of the Singaporeans involved in the meeting as "sad" and "regretful".

He said it is an absolute no-no to invite a foreign politician to intervene in Singapore's domestic politics, and added "it is quite clear what that means" when Dr Thum wrote in a Facebook post after the meeting that he had urged Tun Dr Mahathir to "take leadership in South-east Asia for the promotion of democracy, human rights, freedom of expression and freedom of information".

Responding on Monday, Dr Thum said: "I love my country and my people. I believe democracy, human rights, freedom of expression, and freedom of information will make Singapore and our world better."

He added that he would never stop fighting for a Singapore that embraces those values.

Dr Thum also described Malaysia as a "beacon of hope for democracy in South-east Asia", and said he conveyed to Dr Mahathir "the hope that many of us feel". 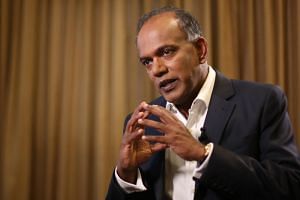 In a Facebook post on Saturday, Marine Parade GRC MP Seah Kian Peng had also criticised Dr Thum for suggesting that Singaporeans should rejoice on Malaysia's independence day, among other things. Mr Seah added that "it appears quite clear to me that PJ Thum does not wish Singapore well".

Referring to a talk he gave at a forum in Johor Baru on Aug 18, Dr Thum said he does not want Singapore to "do a Malaysia" but for "Singapore to do a Singapore".

The solution to many of the Republic's problems, he said, lies with Singaporeans.

"But that does not preclude us from learning from others' experiences to make our country better," he said, adding that "we can always aspire to improve the quality of our democracy".