SINGAPORE - Three visitors to Tan Tock Seng Hospital (TTSH) Ward 9D, a pharmacist and one patient made up the five new Covid-19 cases linked to Singapore's largest active cluster on Tuesday (May 4).

All of them were detected from proactive testing of patients, visitors and staff at TTSH or their close contacts, and had already been placed on quarantine, said the Ministry of Health (MOH).

In total, 40 cases are now linked to the TTSH cluster.

Of these, five have tested positive for the virus variant from India. This includes the earliest member of the cluster to have Covid-19 symptoms, a 57-year-old TTSH patient who developed a fever on April 16.

The nurse who was the first detected case of the TTSH cluster also tested positive for the variant.

Covid-19 in the community continues to rise, with the number of new cases increasing to 64 cases in the past week from 11 in the week before.

Three of the cases visited Ward 9D between April 18 and April 28.

- Case 62801 is a 53-year-old Singaporean who visited the ward on multiple occasions between April 18 and April 28.

She was contacted by MOH on April 29 night to self-isolate, and quarantined on April 30.

She is asymptomatic, but was tested for the virus on Sunday during quarantine, and her result came back positive the next day.

Her serology test result is pending. She had received her first dose of Covid-19 vaccine on April 17.

She was quarantined at a dedicated facility on April 30. On Sunday, she developed a runny nose, sore throat and fever and reported her symptoms.

Her test result came back positive for Covid-19 on the next day. Her serology test result is pending.

She was quarantined at a dedicated facility on April 30.

On Monday, she developed a sore throat and fever and reported her symptoms.

Her test came back positive for Covid-19 but her serology test result is pending.

The remaining two cases are a TTSH pharmacist and a patient at Ward 9D.

- Case 62803 is a 25-year-old Singaporean pharmacist at TTSH, and had interacted with patients and staff at Ward 9D on April 20.

He developed a mild runny nose on April 30 but this was resolved on the same day.

On May 1, he was tested for Covid-19, and placed on quarantine in the early morning of Monday. His result came back positive on the same day. His serology test result is pending.

The pharmacist had received his first dose of Covid-19 vaccine on Feb 25, and the second dose on March 18.

On Sunday, he developed a cough and fever and was tested again for Covid-19 the next day.

On Tuesday, his result came back positive. His serology test result is pending.

There were also 12 imported cases who had been placed on stay-home notices on arrival in Singapore.

This takes the tally of people infected here to 61,252.

Sheng Siong Supermarket in Ang Mo Kio, Newton Food Centre and a restaurant at Velocity were among places added to the list of locations visited by Covid-19 cases linked to TTSH while they were still infectious.

Gyms and other higher-risk settings to be closed; size limits on large events tightened

Exam-style seating at schools, learning journeys to be suspended amid stricter Covid-19 measures 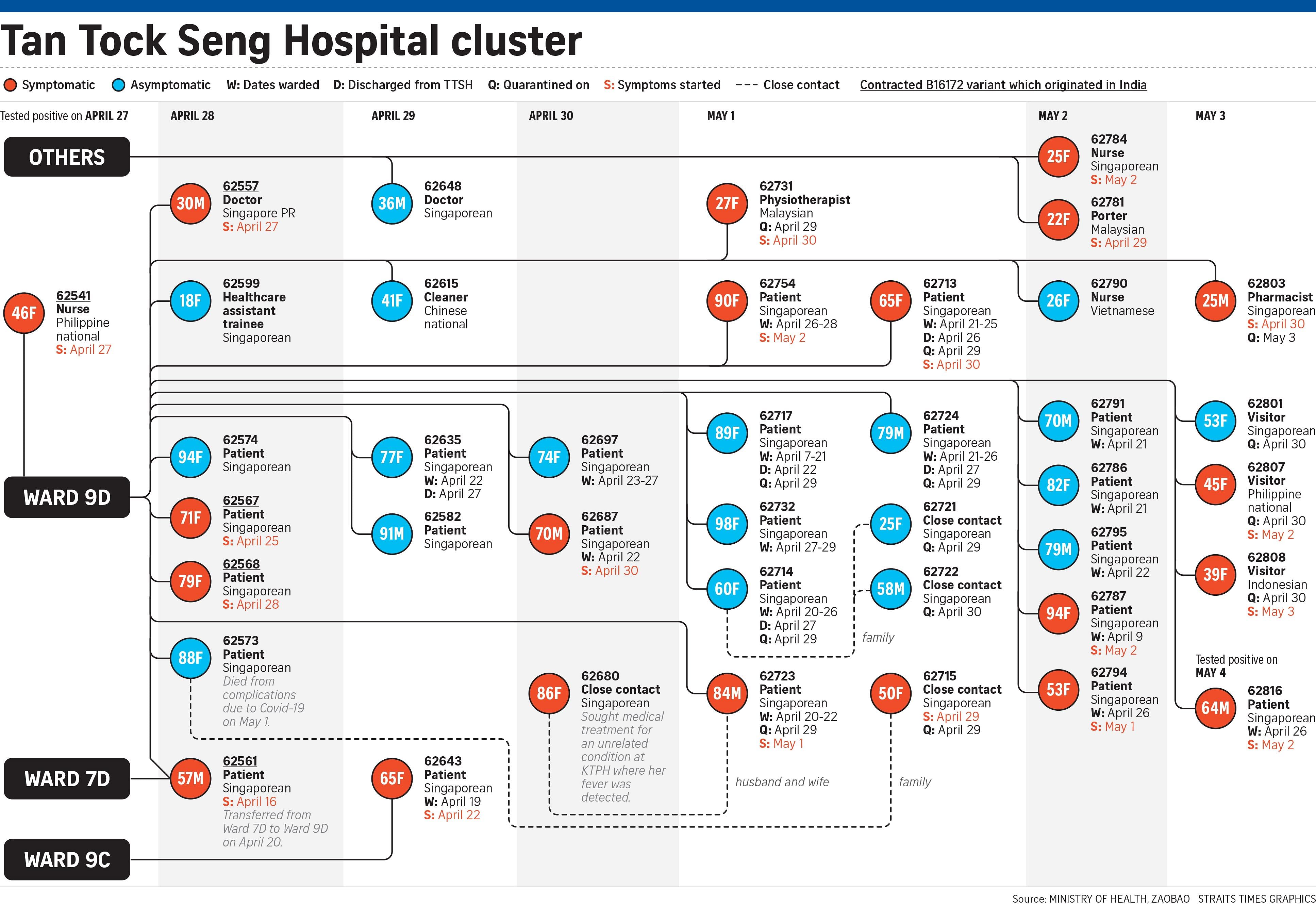 People who have been to these places should get tested for the virus, which is free for them, the authorities said on April 30.

Those identified as close contacts of confirmed cases would already have been notified, MOH added on Tuesday night.

With 17 cases discharged on Tuesday, 60,808 patients have fully recovered from the disease.

A total of 131 patients remain in hospital, including two in critical condition in the intensive care who are unrelated to the TTSH cluster.

Another 267 patients are recuperating in community facilities.

Singapore has had 31 deaths from Covid-19 complications, while 15 who tested positive have died of other causes.

Get full details on the new Covid-19 cases here.