From June, they will receive cards entitling them to health benefits, and package details

Come April, the 500,000 Singaporeans who are born in the 1950s will receive letters confirming their eligibility for the Merdeka Generation Package.

And from June, they will receive welcome folders containing their Merdeka Generation cards, as well as details of the package and how they can tap the benefits when they are rolled out starting July.

This update was shared by Dr Amy Khor, Senior Minister of State for Health, at askST@ NLB last night, the first public engagement session on the Merdeka Generation Package.

The 90-minute session at the Central Public Library in Victoria Street saw Dr Khor and Permanent Secretary for Health Chan Heng Kee speak about the key benefits of the package and field questions on them. It was moderated by Straits Times news editor Zakir Hussain and attended by about 200 people.

"The package is really about appreciating and recognising you for your unique contributions," Dr Khor told the audience of largely Merdeka Generation members.

"The package is to support you and encourage you to continue to remain active and healthy."

Mr Chan noted that the families of Merdeka Generation members also benefit, as it gives them greater assurance over healthcare costs. 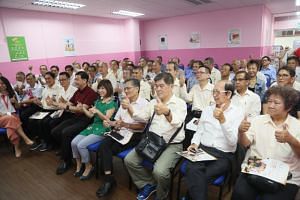 The Merdeka package was first announced by Prime Minister Lee Hsien Loong at the National Day Rally last year. It aims to honour seniors born in the 1950s for their contributions in shaping Singapore.

Details were outlined during the Budget last month, which set aside $6.1 billion for a fund to cover the full projected costs of the package - estimated at over $8 billion over the Merdeka Generation's lifetime.

Similar to cards under the Pioneer Generation Package launched in 2014 for citizens born in or before 1949, Merdeka Generation cards will offer subsidised rates to those visiting general practitioners and dental clinics under the Community Health Assist Scheme (Chas).

The Merdeka package's main benefits this year will be rolled out in two phases. In July, eligible seniors will get an automatic Medisave top-up of $200 a year for five years. They also get additional MediShield Life premium subsidies, and a $100 top-up to their PAssion Silver cards that can be used for public transport and activities at community clubs and sports facilities.

From November, members can get additional outpatient subsidies at polyclinics, specialist outpatient centres and Chas GP and dental clinics.

The talk was streamed live on the Rings.TV application, which had more than 726 views. The video can be replayed via the app, which can be downloaded from the Apple App Store or Google Play Store.

The askST@ NLB series is a monthly collaboration between the National Library Board and ST in which ST journalists helm discussions on topics.

In the next session on April 26, ST Schools editor Serene Luo will discuss details on how to help your child develop a love of English. Readers may register at http://str.sg/english

A version of this article appeared in the print edition of The Straits Times on March 30, 2019, with the headline 'Those in Merdeka Generation will get letters in April'. Subscribe
Topics:
More
Whatsapp Linkedin FB Messenger Telegram Reddit WeChat Pinterest Print Purchase Article Copy permalink