SINGAPORE - News that a building in Thomson Road will be demolished to allow nearby excavation works to be carried out safely came as a shock to the owners of the 12 residential units there.

For months, they and their tenants had engaged with the authorities about the need to vacate the building temporarily as its foundation had to be strengthened to withstand the impact from the construction of an underground tunnel for the upcoming North-South Corridor.

All had moved out by February, but the expectation was that in two years, they would be able to return to their units or lease them out again.

With the improved connectivity brought about by the transport corridor, which will have dedicated bus lanes, cycling trunk routes and pedestrian paths connecting towns in the north to the city, there were hopes of a collective sale in future.

But any chance of a windfall was dashed by the sudden announcement on Friday (April 16) morning that the building at 68 to 74 Thomson Road and its 776 sq m site were being acquired for demolition.

"I'm still in shock," said Mr Roger Ting, 63, who owns a unit in the building. "To us, this is a sudden U-turn by the Land Transport Authority and Singapore Land Authority. I told them a lot of owners are not very happy. In fact, we are all very concerned about the compensation that we are going to receive. We do not want to sell at this point in time."

Mr Ting, a semi-retired architect, bought his unit 10 years ago, spending about $1.5 million, including the cost of renovation. He has been leasing the unit to expats and said he collects $9,000 in rent every month.

"Taking the building away is like taking away my retirement fund," he said. With his daughter only in her first year of university, Mr Ting added that he is worried he now has to work harder to put her through school and to retire comfortably.

Another unit owner, who declined to be named, said he bought his unit for over $1 million about six years ago as an investment.

Although he will be compensated based on the market value of his unit at the time of the acquisition, he said he is not sure if he will break even. He said the authorities have given unit owners a list of approved valuers to conduct the appraisal, but he did not trust that they will give him a fair shake.

He and Mr Ting also rue a loss of potential income as they would have been able to sell their units at a higher price in a collective sale.

The owners had tried to sell en bloc two years ago and Mr Ting, who chaired the sales committee then, said each owner expected to get at least $3 million if the collective sale went through.

"If (the Government) acquires my property, I think the figure will not be anywhere near," he said.

Construction of North-South Corridor back in full swing

Mr Ting said he believes the building can survive the strengthening and excavation works.

"I have asked LTA to give me an opportunity to look at their engineers' report because I have been in this line for more than 30 years. I understand structural engineering issues fairly well," he added.

Even if the building needs to be knocked down, he said, he does not understand why the authorities are also acquiring the land. "The concern is the safety of the building. The land is not in the equation here," Mr Ting added.

Calling the acquisition heavy-handed, he said the unit owners plan to meet today to discuss their options. "It is not fair to us," he said. "They did not give us a chance to voice out our concerns."

Mr David Ng, a council member at the Institution of Engineers Singapore, said acquiring and demolishing the building, and rebuilding the site again after the excavation works are done make sense.

Given the building's foundation, the proximity to the planned excavation work and the ground conditions, the construction of a tunnel nearby could cause some of the ground to move downward and, in turn, cause damage to the building.

The work to strengthen the building's foundation involves adding piles beneath it. The disturbance due to the micropiling works carried out within the building could lead to excessive distortion of the building's structure, making it unsafe for workers doing the work. "The risk becomes very high," Mr Ng said.

Workers will need to core and break through the floor to install the additional piles. "This creates a lot of vibration, which is not good to the building if the concrete strength of the building is already lower than what is required."

Mr Ng said there is a risk of fatalities if structural elements come loose and fall on workers. While building collapse is an extreme scenario, it is possible if disturbance is significant, he added. 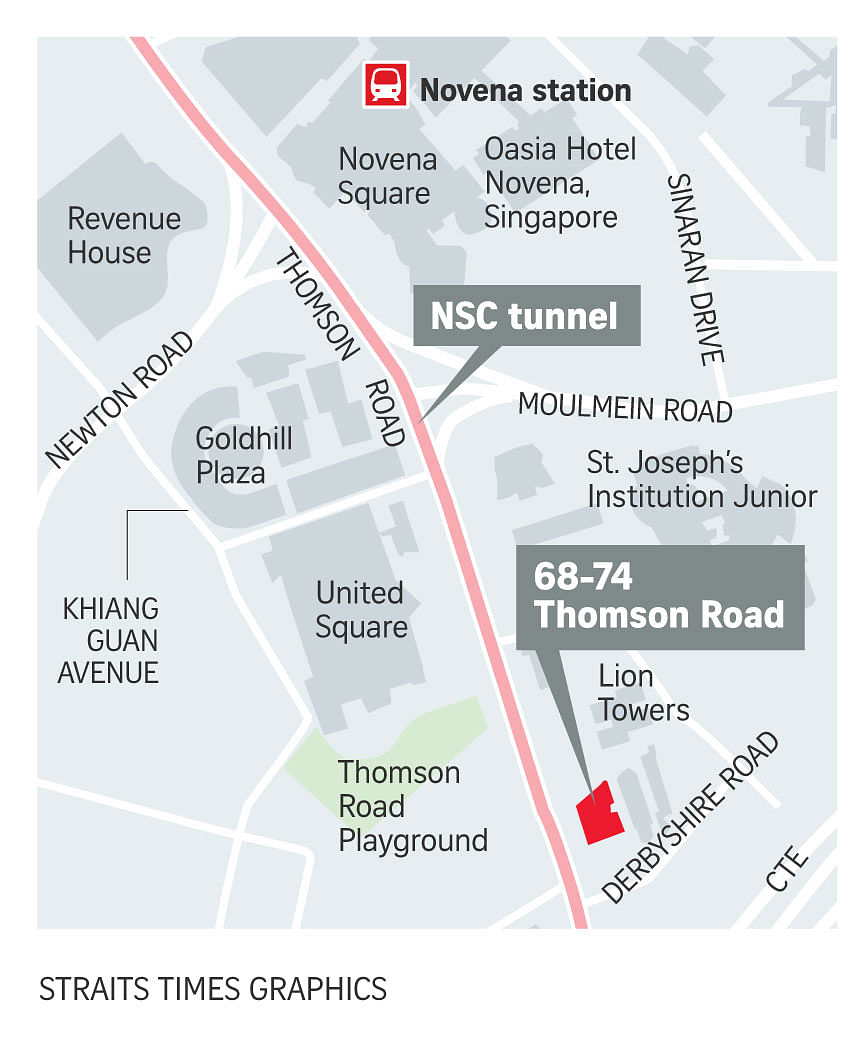 Building to be demolished for safety reasons

• The four-storey mixed-use building at 68 to 74 Thomson Road slated for demolition was built in 1964 on shallow foundation. Part of the foundation was altered in 1994 as a section of the building had to be propped up by piles after an adjacent building was demolished.

• In 2013, it was assessed that the impact of the upcoming North-South Corridor (NSC) project on the building would be manageable.

• A civil contract was awarded in 2018 to build an underground tunnel for the NSC 6m away from the building. A 2020 assessment found that the building’s foundation, which is not uniform and is built on soft ground, needed to be strengthened to withstand excavation works for the tunnel.

• In September last year, building occupants were asked to vacate the premises temporarily. All moved out by February this year.

• In January, it was found that the building’s concrete was too weak to allow for foundation strengthening works. The Building and Construction Authority’s own assessment in February concurred with the finding.

• The Government acquired the building on April 16 as it was impractical and risky to strengthen it. The building’s 16 units must be returned to the state by end-July and the building will be demolished by end-2021.