It cannot withstand excavation work for tunnel; owners to get market value compensation

A four-storey building in Thomson Road will be demolished to allow excavation for an upcoming North-South Corridor tunnel just metres away to begin safely.

The authorities found that the building was not strong enough to withstand the work.

Consequently, the 57-year-old mixed-use building at 68 to 74 Thomson Road and the 776 sq m plot of freehold land it sits on were acquired by the Singapore Land Authority (SLA) yesterday for demolition.

The owners of its 12 residential units and four commercial units on the ground floor will have to return them to SLA by the end of July.

The building, which previously housed shops such as a Tanjong Rhu Pau outlet and the Animal Infirmary veterinary clinic, will be demolished by the end of this year.

The owners will be compensated based on the market value at the time of the acquisition.

SLA and the Land Transport Authority (LTA) said they will work closely with the owners and assist them through the acquisition process. The value of each unit may differ and the appraisal work will be outsourced to private valuers.

The corridor was originally intended to be a vehicular expressway but was later reconfigured to include dedicated bus lanes, cycling trunk routes and pedestrian paths, making it Singapore's first integrated transport corridor.

Connecting towns in the north to the city, the corridor, when completed, could shorten bus journeys from towns such as Woodlands, Sembawang and Ang Mo Kio to the city by 10 to 15 minutes.

In a joint statement, SLA, LTA and the Building and Construction Authority (BCA) said the building's foundation required strengthening, but its concrete was not strong enough to allow this. 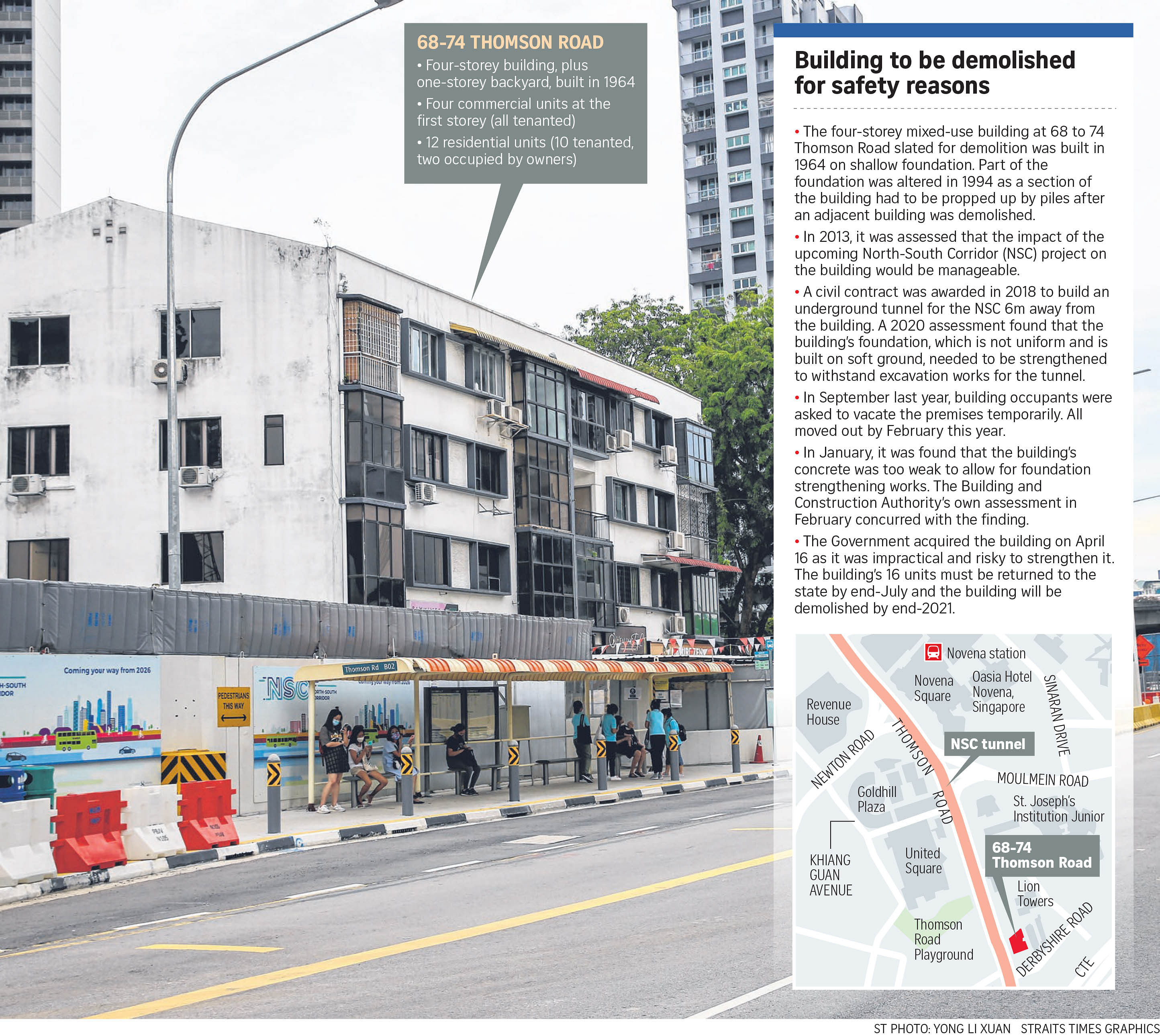 LTA-appointed engineers had carried out an impact assessment last year ahead of the excavation works and discovered that the foundation was not uniform.

The building was constructed in 1964 on a shallow foundation on soft ground. Part of it was propped up with piles in 1994 following the demolition of an adjacent structure.

In their assessment, the engineers found that the foundation needed to be strengthened so it could withstand the impact of the tunnel excavation. To ensure safety during the strengthening works, the building's occupants were asked to vacate their units temporarily.

By February, all had moved out and found alternative places to live and do business.

LTA conducted further tests, which involved taking core samples from the building's concrete, for due diligence. Such tests are invasive and could be done only after the building was vacated, the authorities said.

They found that the concrete was weaker than expected and it would be risky to carry out the foundation strengthening works.

BCA had also conducted an independent inspection of the building in February and agreed with LTA's assessment that the building was safe if there were no major construction works in the vicinity, but it would be impractical and risky to carry out the strengthening works.

It is the only building near the 21.5km North-South Corridor that has been assessed to require foundation strengthening works.

The authorities said the acquisition and demolition of the Thomson Road building will not affect the construction timeline of the corridor. It was previously due to be completed in 2026, but this has been pushed back to 2027 as work was delayed due to Covid-19.

Construction of the corridor began in 2018 after the first civil contract was awarded in 2017, for a stretch between Novena Rise and Toa Payoh Rise. All 14 civil contracts for the construction of its tunnels and viaducts have been awarded, with the final batch granted in late 2019.

The corridor, which will run almost parallel to the Central Expressway, will also alleviate traffic on the expressway and major arterial roads such as Thomson Road and Marymount Road.

Meanwhile, its cycling trunk routes and pedestrian paths will link up with the park connector network and local cycling paths within Housing Board towns along the entire corridor.

Building to be demolished for safety reasons