It is a job which may not have existed a decade ago, but one now finding increasing currency, particularly among those in the public eye.

Meet digital consultants Natasha Zhao, 29, and Freda Kwok, 27. Among their clients are six People's Action Party MPs - three of them holding ministerial portfolios including one Senior Minister of State.

This month's election results were a culmination of a year's hard work for the MPs who hired them. All six clients were elected. "We worked on their online reputation," says Ms Zhao. "A good digital engagement plan is best implemented early, during times of peace."

The MPs identify and recruit residents who support them early on. The digital consultants then advise these advocates on the dos and don'ts of online campaigning. 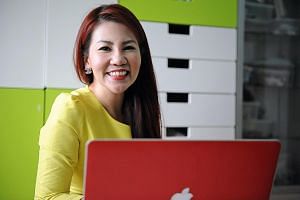 They use social media monitoring tools to "listen" in on online conversations, then let them know when action is needed. "Part of the battle involves picking the right battlefield. It may not make sense to have supporters go into overly hostile territory," says Ms Kwok.

Guidelines include having these supporters post replies from a genuine account, maintaining an objective tone, sharing personal experiences and refraining from personal attacks on other netizens.

The tools also determine what type of content resonates with netizens. For instance, posts containing personal thoughts and insights into a candidate's personal life get up to three times more likes, comments or shares on social media compared to ones on policies.

The consultant might also suggest responses to issues or a cause.

Ultimately, however, the client decides what information goes out.

One candidate, who declines to be named, says residents of all ages follow her on Facebook: "Amid rising expectation from voters and the fact that many may not have time for face-to-face engagement, social media becomes a more important platform for reaching out to these residents."

Ms Zhao and Ms Kwok, both from QED consulting, decline to reveal how much the MPs paid. Digital consultants can charge up to $150 an hour.

Professor Ang Peng Hwa, an adviser at the Singapore Internet Research Centre, says social media matters can get out of hand: "That some candidates are using consultants shows they are playing it safe. You can't respond to everything, so you'll need to be smart about what you reply to, and what you say."

So how do the other parties handle their social media?

The Workers' Party declined to be interviewed, while questions sent to the Singapore Democratic Party went unanswered.

People's Power Party founder Goh Meng Seng says his party does most things on its own. "Our time and resources are limited and our supporters understand that. Our content also feels more authentic."

Singapore Democratic Alliance (SDA) chairman Desmond Lim says his party's efforts include actively monitoring comments on its Facebook page, which is regularly updated. "It is important that comments do not steer mindsets in the wrong direction and dilute the essence of what SDA stands for," he says.

Some politicians, says Ms Kwok, also rely on help from volunteers, who are not digital professionals but are enthusiastic and savvy about social media use.

"The danger is that sometimes they might not fully understand the complexities and sensitivities involved in digital communications," she adds.

That is one reason Prof Ang thinks the political dimension on social media here has space to grow, compared to campaigns like US President Barack Obama's in 2008.

"There was more social media buzz this time round compared to the last election, but nothing really stood out," he says.

The consultants, however, are optimistic.  Says Ms Kwok: "How an item trends on social media will continue to be an important marker in tracking how critical it is."