SINGAPORE - Gardens by the Bay will have a new chairman from next month when incumbent Theresa Foo steps down after six years at the helm.

In a press statement on Thursday (Nov 16), Gardens by the Bay praised Mrs Foo - who is also chairman of the Singapore Business Federation Foundation - for growing the gardens into an "internationally acclaimed horticultural attraction".

During her chairmanship, she supported several initiatives to promote greater visitation and involvement of Singaporeans - including the "Gift of Gardens" community outreach programme.

Mrs Foo, who enjoyed an illustrious banking career, was also credited with providing valuable guidance in corporate governance, helping the gardens to pick up the Charity Governance Award at this year's Charity Transparency and Governance Awards.

"While Gardens by the Bay is relatively young, having just celebrated its fifth anniversary this year, it has been a rewarding experience for me to be part of the Board, pioneering key milestones," said Mrs Foo.

"Not many would have the opportunity to witness the evolution of an architectural marvel into a place of wonder for all ages and an icon of Singapore."

Gardens by the Bay CEO Kiat W. Tan thanked Mrs Foo for her commitment and contribution since the gardens' inception. 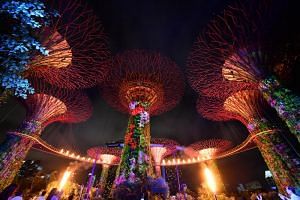 In Pictures: Gardens by the Bay turns 5

"The gardens' first five years were filled with many firsts, which were also milestones for Singapore as a City in a Garden. Mrs Foo's guidance has seen us through a crucial stage, and her dedication to the Board has set a strong foundation for the gardens in its efforts to create wonder for all."

Paying tribute to Mrs Foo, incoming chairman Mr Niam, 59, said the gardens has placed Singapore on the world map with its achievements under her leadership.

Mr Niam, who became deputy chairman on Dec 1 last year, is also currently the chairman of the Maritime and Port Authority.

He retired from the Administrative Service on Aug 1 last year after a public sector career spanning 33 years.

The 101ha gardens, which officially opened in June 2012, was considered a key plank in Singapore's vision of creating a "City in a Garden".

Visitorship hit one million less than two months after it opened, with more than 39 million people visiting the gardens to date.