HONG KONG - The Straits Times clinched 11 awards, including four golds, at the 6th Asian Digital Media Awards on Wednesday (Nov 18), the biggest win so far for any publication at the annual event.

The flagship newspaper of Singapore Press Holdings (SPH) won the gold awards for Best News Website, Best Data Visualisation Project, Best Lifestyle Mobile Service, and for Best Use of Online Video for its weekly series It Changed My Life, which features Singaporeans who have overcome the odds to turn their lives around.

It is the second accolade in two months for the video series, which also won the gold award in the same category at the World Digital Media Awards in Hamburg in October. 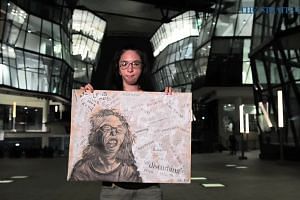 The Straits Times' 11 wins at Asian Digital Media Awards: Here's a look at the winning works

The newspaper, which won one bronze award in 2014 for its mobile service, underwent a major overhaul this year to mark its 170th anniversary, and to better showcase the best of its content across all platforms.

ST editor Warren Fernandez said: "We are delighted with this haul of accolades from our peers in the media industry. Most of all because it says to our readers that ST is now a multimedia news outfit."

"Readers are the beneficiaries of this. They can enjoy award-winning content, on any platform they chose. Indeed, more and more people are engaging with our content in more ways today, throughout the day," he added.

ST deputy editor Sumiko Tan said: "The wins were possible because the ST newsroom works as a team, producing content for all platforms."

"Credit also goes to the Digital team which is made up of talented, creative and incredibly hardworking journalists always on the lookout for new ways of telling a story," she added.

"After our revamp in July, we wanted to be among the best in everything we do in digital. Winning 11 awards against other Asian media organisations is a testament to the quality of the ST and the talented people we have across our newsrooms," said Mr Eugene Leow, ST digital editor.

SPH's total haul of 12 awards is the biggest so far for any organisation at the event.

"This has been our best haul at the Digital Media Awards. There were a total of 133 entries from 34 media companies in Asia, with 19 judges mainly from Europe. So it's a great validation of the quality of our work and the transformation we've undergone in the past two years," said Mr Patrick Daniel, editor-in-chief of the English/Malay/Tamil Media group of Singapore Press Holdings.

The Asian Digital Media Awards give recognition to individuals and organisations in Asia which embrace new technology, innovative thinking and creativity in digital media.

Organised by the World Association of Newspapers and News Publishers (Wan-Ifra), the event was held in conjunction with the Digital Media Asia Conference.

"I have been consistently impressed with the applicants in the last couple of years, but there have been absolute standouts this year in every category from mobile to video," said Mr Ben Shaw, director of global advisory for Wan-Ifra.

"Especially in mobile, Asia is at the forefront of this technology. The level of quality and the overall fit and finish of the innovation is on par, or exceeding that of any other region."

This year's speakers included experts from media organisations including The Guardian, Bloomberg, Google, Wall Street Journal and The Straits Times. They shared case studies and best practices on a range of topics including media for millennials, data strategy, audience intelligence, content optimisation and web TV - video.

Here's a look at the winning entries:

The news portal of The Straits Times underwent a major revamp in July to mark the 170th anniversary of the newspaper, and to better showcase the best of its content across all platforms.

The mobile-friendly website has a clean and modern look. Content is organised according to "blocks", and the best stories across topics are highlighted in these blocks.

A new round-the-clock live blog called ST Now serves up the latest breaking news as soon as it happens.

A weekly video series which features Singaporeans who have overcome the odds to turn their lives around. Helmed by senior writer Wong Kim Hoh and directed by executive video journalist Shawn Lee Miller, the series began in November 2013.

A cross-media project that marks the 10th anniversary of the Indian Ocean tsunami of 2004.

A microsite and an e-book repackaged some of the best content from a 15-page special in the print edition of ST. This project is also the first major editorial collaboration between members of the Asia News Network.

Who's Who Of Orchard Road

An interactive graphic detailing the who's who on Singapore's famous shopping street.

The ST apps for iPhone and Android devices were redesigned and launched together with the revamped print edition on July 1 this year to celebrate the 170th anniversary of the newspaper.

Besides more personalisation and sharing of the content, the apps also offer more video and interactive content as the newspaper steps up its drive to bring the news in moving images, not just words.

An interactive monthly lifestyle magazine with articles on style, design, pursuits, travel and food. The series has 17 issues so far and average downloads per issue is about 13,000.

The Straits Times Star E-books app for iPhone and Android devices features an online library of e-books. They include Lee Kuan Yew: The Final Journey, which tells the story of the death of Singapore's late prime minister; The Life, a monthly lifestyle magazine; and Singapore's Jubilee Election: What Were Voters Really Saying?, which captures the highlights of the General Election in September this year.

More than 7,000 people wrote messages on the tribute wall set up by ST to express their gratitude to Mr Lee Kuan Yew who died at age of 91 on March 23.

This is the latest offering from the newspaper to meet the needs of time-starved readers. This platform provides readers with quick and easy access to breaking news and useful information. The breaking news alerts, which reached over 300,000 devices, also extend to Apple Watch.

ST170: A Journey Together To Celebrate

This is a multi-platform, multi-party effort to capture the 170-year history of The Straits Times and celebrate the milestone with a diverse range of activities with its readers, stakeholders and staff. The key events, showcased in a microsite, included a major three-month long multimedia exhibition, an e-book, a concert in the park, and a year-long ST170 treats to thank readers.

A digital platform by the Singapore Press Holdings and property developer CapitaLand which invites the public to contribute ideas on how to improve the built environment which Singaporeans will live, work and play in by the year 2065.

Here are the full results from selected categories: