SINGAPORE - Growing some fruit and veg for the kitchen table is hard enough what with pesky insects and pests but community gardeners have an even more infuriating foe to contend with - thieves snitching produce and digging up entire plants.

This has been happening for as long as the community plots were introduced around 15 years ago and most gardeners can put up with people taking a few cuttings or leaves but they draw the line at ripping off plants, stealing fruit and destroying greens.

These include community groups erecting signs reminding the public not to pluck edibles without asking and covering rarer plants with nets.

But thefts still happen in most gardens at least once a month.

The community garden, which has about 100 plots tended by 50 gardeners, encounters at least one theft every month, said Ms Ho.

Ms Ho often finds her pandan and papaya plants missing: "My neighbours who look forward to harvesting their big and ripened jackfruit, papayas and winter melon will find them gone the next day.

"We try to help to look out for each other's plot and make sure we don't see suspicious people loitering around the plots."

Gardeners said mischief is prevalent in the middle of the night and early morning, but some thefts have occurred from right under the gardeners' noses.

Last week, full-time gardener Raymond Tang, 45, who has a plot in the Social Innovation Park in Punggol, spotted a lady plucking some of his blue pea flowers.

"She apologised and said she saw no one to approach to ask for permission before plucking. I told her if no one was around, she should have left the plants alone."

Last year, finance manager Veron Goh, 38, who grows edibles in a community garden in Tampines North, occasionally saw a man lurking around the garden with a pair of scissors. 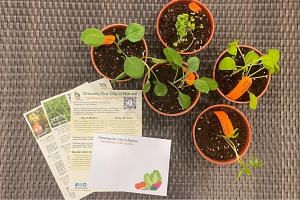 Gardening plots to increase twofold by 2030; NParks to give away seed packets to spur growing vegetables at home

Place of discovery and fun for budding community gardeners

"Every week he would ask for eight to 10 cuttings of rare plants such as cotton, hibiscus and orchids, and we would give them to him. Yet, he still steals," she said.

Apart from community gardens, allotment gardens - individual raised plots available for rent in parks - see more theft as they are not fenced.

A number of community gardens have fencing or are locked but people can sneak in when they are open.

"Sometimes, the culprits can be the gardeners also, especially if they want to grow veggies quickly, instead of starting from the seeds," noted Ms Ho.

But the pots have been forcefully removed a couple of times, including one containing a desert rose that he planted in his daughter's old boot that was also secured to the wood.

Gardening enthusiast Alex Ng, 48, refused to use community and allotment plots because he was worried about the thefts he has seen mentioned on social media and heard about from others.

The pastry chef is an experimental gardener who grows challenging plants such as blackberry, fig and longan, and he does not want his efforts to be stolen.

Instead, he rents a private plot for $400 a month in a farm area near Sembawang.

Community garden theft cases are rarely reported to the police and Residents' Committees that oversee the plots in housing estates.

"We choose to talk and explain to the person, if we know who he or she is. We don't bring it up to the MP or police," said retiree Frankie Tan, 55, who is also a Community in Bloom (CIB) ambassador.

CIB ambassadors are volunteers under the National Parks Board (NParks) who help to set up community gardens and impart gardening knowledge.

But a man who stole nine bonsai plants worth $12,400 from Yuhua Community Centre and a Residents' Corner Garden in Jurong East was jailed for 12 months in 2016.

There are 1,500 community gardens and 1,100 allotment gardens islandwide. By 2030, Nparks aims to more than double the number of gardens but gardeners are not convinced that theft will end with more plots.

"This is an issue with people's mindset and mentality. If some people are lazy to grow plants, they take the easy way out," said Mr Tang.

Meanwhile, community gardeners have come up with creative and generous ways to prevent theft.

"A few gardeners in Bishan will wrap their papayas in cloth or take them home to ripen. We have to be faster than the person who wants to grab them," said Ms Ho.

She randomly tosses papaya seeds to other plots to prevent theft within the garden: "When others have what you have, the tendency to take will not be high. That is my strategy."

Similarly, coffee shop supervisor Mike Goh, 61, who runs a community garden in a church in Bedok, plants extra blue pea and papaya trees along the church's fence for private housing residents nearby.