Professor Lutfey Siddiqi, a governor at the London School of Economics, speaks of his surprise at learning that a schoolboy in New Jersey, the United States, had been selling custom-made iPhone covers to friends at US$2 (S$2.70) apiece.

"He has a 3D printer at home that makes them for him," the adjunct professor of risk management at the National University of Singapore mused, speaking at a panel discussion on the future of Asia organised by The Straits Times. "What was probably done in China before it went to Bangladesh has now gone back to New Jersey because of that feature. That's the extent of onshoring being enabled by 3D printing."

It used to be that developing nations worked to a set plan to move up the growth ladder: Invite in overseas capital, move farm hands into factories operated with cheap labour, seek export markets for the goods thus manufactured and use the consumption power unleashed by income distribution to spur the economy. Then move up the chain to value-added manufacturing and services.

China, which thus lifted 600 million from poverty and now makes its own passenger aircraft, was the star example. But so are Singapore, Malaysia and several other countries. India leapt from agriculture to services as the mainstay of its economy without the intervening industrialisation period, thanks to an outsourcing boom spurred by multinationals discovering its engineering talent.

Now, a whole host of disruptive technologies has emerged that threaten to upend every calculation. Machines are doing the work of men and women, making it possible for adidas shoes to be custom-made in Germany at lower prices than the Indonesian and Cambodian factories that used to make them. Machines designed to handle even fine textiles threaten jobs in Bangladeshi factories, putting livelihoods of women at risk. Artificial intelligence and advanced algorithms are making engineers and call centre operators in Indian cities like Bangalore and Gurgaon increasingly redundant. New buzzwords like "machine learning" sprout by the day as robots learn to self-correct.

Meanwhile, geopolitical tensions are rising across Asia as the US pivots to take on the rising challenger for global dominance, China. Asia has emerged as the biggest arms importer in recent years as nations seek alignments to ensure their security. These are uncertain times. 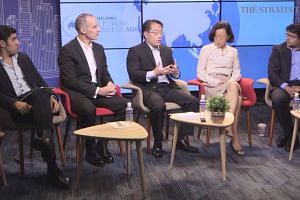 Singapore in a digitised world

Yet, the prognosis offered by the ST expert panel was not at all dire. Demographics, growing regional integration, advances in technology - properly harnessed and with people given the right skills - can be a boon, panellists said. Adroit diplomacy can tamp down tensions.

Take the challenge of machines. No company is so thick into the automation revolution as Zurich-based ABB, the engineering conglomerate. With China emerging as the top buyer of robotic equipment and factories in every Asian country from Japan to India increasing their use of robots, ABB is on to a good thing. But Mr Johan de Villiers, ABB's country managing director, bases his optimism for the region on its demographics.

"I am absolutely positive on Asia, driven purely by demographics," he said. "Two-thirds of the world's middle class will be in Asia by 2030. In 2009, that was only one-third. And that connects with the age of the customer, to be close to market is going to be essential. That has a huge implication for the manufacturing sector."

It is human nature, says Mr de Villiers, to underestimate what you can gain from change and overestimate the potential losses. "I'm convinced that automation and areas like robotics, digitalisation, are going to be job creators. If you simply look back, 2002 to now, all the economies except Japan have seen increased employment as they have increased automation."

Draw an arc of eight hours' flying time from Singapore, and the circle encompasses Dubai in West Asia and Tokyo in the East. Within this area the US, China and Japan are jostling for influence. To Mr Tan Soon Kim, assistant chief executive officer of IE Singapore and futurist Parag Khanna, initiatives such as the Trans-Pacific Partnership, the economic plank of the US strategic pivot, China's One Belt, One Road (OBOR) programme and Japan's moves to open its wallet to fund key infrastructure and capacity building projects make this a veritable arc of opportunity.

Add to this India's exploding market of 1.2 billion, now emerging as a single market as a uniform goods and services tax takes shape and with a prime minister pushing initiatives such as Smart Cities and Digital India, and you get icing on the cake.

For these reasons, the pessimism that has descended on the West, says Professor Kishore Mahbubani, dean of the Lee Kuan Yew School of Public Policy, is not warranted in the Asian context.

"I can confidently predict the three biggest, most populous, countries in Asia - China, India and Indonesia - can keep growing at roughly 6 to 7 per cent per annum for the next few years comfortably," he told the panel.

Mr Khanna, author of the recent book Connectography, is a firm backer of initiatives such as the Asian Infrastructure Investment Bank and OBOR. He says the more Asia invests in infrastructure, connectivity and skills, the more peninsular, maritime and interior Asia will gel. What's more, it also could have a "significantly positive geopolitical impact". "If you ask trade economists which countries stand to benefit the most from the various moving parts, they would point to precisely those that are playing all sides, multi-aligning as I call it. And that's a very positive trend for Singapore and for Asean to play."

To be sure, the best laid plans of mice and men do go awry sometimes.

One concern Mr Khanna voices is the "lack of diplomatic maturity" on display as China asserts itself and the US, Japan and India push back.

With the Philippines, Vietnam, Brunei and Malaysia being direct parties in the dispute over maritime territory, the strains on Asean are showing. What's more, the domestic politics and inward-looking tendencies in some countries are worry points too, especially from a Singaporean perspective.

"People are now talking about deglobalisation as a trend. That would be more worrying for us than all these technological disruptions," says Ms Lydia Lim, associate opinion editor of The Straits Times. "There's also the issue of leadership. What I see lacking in Asean is, who is leading this organisation? The large countries like Indonesia, they are very focused inwards. And Thailand - in terms of the economy, Singapore found a very good partner under previous administrations. Add to that, the China factor (and its impact on Asean unity)."

Prof Mahbubani endorses some of this. "Thailand is the country that has the most uncertain political future," he says. "And Malaysia, too, is a country that we need to worry about." The third risk, and the most obvious, is terrorism, he adds.

He has little fear of military conflict in the places that people are watching - the South China Sea or the Sino-Indian border. "The place where increasingly I worry about a military accident is between China and Japan", because there the temperatures have risen.

These are times when the past is not always a good guide for what is to come. As Singapore and Asia confront the future with a mix of optimism and foreboding, much will turn on how prepared nations are for the sweeping changes afoot, particularly in technology.

Some smell opportunity in this new world as a virtual channel opens up, in parallel to the physical.

"Technology can work for us," says IE's Mr Tan. "It can also be a disruptor. In future, two types of jobs will be very important. First, workers who can deal with technology-enabled machines. And, second, we need workers who can mine the data, interpret the data and workers who can then execute according to the information that we receive. If Singapore can address these three areas - China; South-east Asia and India; and technology - we'll be on a very good foundation."

The question is whether Singapore's and Asia's education systems are primed for the challenge. NUS' Prof Siddiqi, who moved from Singapore to London a year ago, says his 17-year-old son was treated like a "superstar" because of the maths skills the island had equipped him with. Of such abilities there's no question.

It is the soft skills, emotional quotient, the ability to debate without destroying a relationship and so on, that he worries about.

A version of this article appeared in the print edition of The Sunday Times on August 21, 2016, with the headline 'The outlook is bright but for a few worry lines: Panel The future of Asia'. Subscribe
Topics:
More
Whatsapp Linkedin FB Messenger Telegram Reddit WeChat Pinterest Print Purchase Article Copy permalink