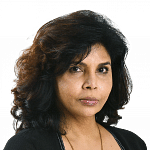 SINGAPORE - The new 280m-tall CapitaSpring at 88 Market Street is set to be one of the tallest - and greenest - buildings in Raffles Place.

Sited at the former Golden Shoe Car Park and slated for completion by December, it will feature a four-storey-high Green Oasis - built to be like a rainforest in the middle of the building, with a "jungle gym", cafe and sky hammocks for tenants. At its rooftop, a sky garden will cradle Singapore's loftiest urban farm.

As lead architectural firm of CapitaSpring, BIG was responsible for the design of the building, while Italian design studio Carlo Ratti Associati (CRA) conceptualised the user experience that will allow people to interact with the space in meaningful ways.

Design thinking is a process of creative problem solving from a human perspective, using technology and available resources.

"We have even managed to retain the much-loved Golden Shoe Hawker Centre as a part of the development," said Mr Yang, who has won international acclaim for his designs since joining BIG in 2007.

As project leader for BIG, he conceptualised the Lego House in Billund, Denmark, in 2017. It looks like giant Lego bricks, featuring interlocking and overlapping buildings and spaces.

He also participated last April in the Singapore University of Technology and Design's (SUTD) critique sessions, called SUTDio, in which he looked at architecture undergraduates' classroom projects and shared his experiences with them.

He said that the work produced by the SUTD students is on a par with the best globally. He was most impressed, he said, by the students' commitment to not only answer the design challenges put forward by the SUTDio sessions, but also how they came up with transformative visions for the future.

Mr Yang spoke to The Straits Times about the future of architecture and how people-centric designs will pave the way in a post-pandemic world.

Q What inspired you to be an architect? What advice would you give to students aspiring to be designers or architects of the future?

A In my undergraduate days, I studied economics, which I was interested in as a social theory of choice, and also fine art, which is in many ways about expressing oneself without feeling inhibited.

I pursued architecture only in graduate school, seeing it as a discipline that appeals to both sensibilities. To me, it is a discipline that looks at how the forces that shape society can become a physical manifestation of its hopes, desires and dreams. It is a rational and systematic way to maximise the potential of human life.

So, young designers and architects need to have tenacity and be bold, and to believe in themselves. I would encourage them to be diligent about creating a culture in their careers, now and in the future, where great ideas can come from everyone regardless of experience.

Design responses and decision-making should be focused on what is best for the project and not who within an organisation makes a comment about it.

Q What are some new technologies or disciplines currently being adopted by architects?

A We live in exciting times in which the development of technologies such as data-driven modelling allows us to process tremendous amounts of information that can then be translated into proposals to our clients.

As architects, we are of course especially interested in how the power of these digital tools can be harnessed to give physical form to the world around us.

For instance, three-dimensional (3D) printing is the next step in the evolution of the inkjet printer, depositing materials instead of ink so that objects can be built up - layer by layer.

Technology such as 3D printing, coupled with other digital design tools, could bring about a new type of architecture that is not just about the form of a building, but about finding new solutions that combine geometry, structure, material sciences and digital design processes.

Q How do you ensure that people are central to your designs?

A In our work, we have to put the objective of the project, of the client and of the people who will be the eventual users first.

In doing so, we also have to constantly question the various forces that affect a project.

This means that we are not afraid to ask questions that may seem stupid or obvious. Frequently, it is the most obvious solution that turns out to be the best solution.

We have found that by being very pragmatic and, as much as possible, removing prejudices about style and artistry from our decision-making process, the obvious solutions often turn out to be the most radical.

Obvious solutions usually have the right mix of practical and everyday ingredients for new forms of architecture that address real-world needs such as inexpensive apartments, a house with a garden, resolving parking space concerns and best orientations for daylight and views.

Q We are inching towards a Smart Nation, with the evolving needs of both developers and consumers. How does innovative design lead the way?

A Technology is at its best when it "disappears". By this, I mean having a seamless interaction with devices and facilities that make daily life easier instead of more complicated.

Our view at BIG is that technology should enable architecture and design to conform more closely to the needs of human life rather than the other way around.

While the difference might seem subtle, it is incredibly exciting because it means that, coupled with the current and emerging tools we have for design, we will discover new ways of living and shaping our spaces and cities for the future.

Take CapitaSpring, for instance. We collaborated with CRA from the beginning on its design.

I have known Carlo (Ratti) for many years, and both our firms have complementary strengths in different areas of design, so it was really a natural fit for us to work together.

As the partner in charge, I have been responsible for the overall design of CapitaSpring tower, working with a core team of extremely talented architects and designers who have been a critical part of imagining and realising the full potential of the project.

Architecture is not a singular but a collaborative effort among clients, consultants and contractors to give form to the future.

In the context of the ongoing impact of the coronavirus pandemic, the value of creating such spaces as part of our built environment can't be overstated.

The integration of biophilia or greenery in the office and home offices has increasingly been acknowledged as being important in supporting mental health, well-being, and even productivity.

Now more than ever, the provision of easy access to nature and outdoor spaces will play a critical role in creating spaces that are also physically and psychologically secure and uplifting.

In the future, these spaces will also be digitally integrated within a smart technology ecosystem, providing seamless experiences to the occupants of the building.

So, in a typical day, a registered occupant will be able to enter the office lobby, pass through the facial recognition turnstiles and have a lift called directly without having a single physical interaction with buttons - a completely frictionless and touchless experience.

Contemporary technology will transform the way a building is used and experienced - from building systems management to the flexibility of use and dynamic fluidity of spaces.

Singapore-American Brian Yang, 42, joined Bjarke Ingels Group (BIG) in 2007 and became a partner of the architecture firm in 2015.

He has worked on a wide range of projects, including 8 House, a residential building in Copenhagen, and the conceptual design of a mobile gallery for London's Tate Modern.

He has also been project leader for a number of competition-winning proposals, including the Amager Bakke/Copenhill waste-to-energy plant in Copenhagen that doubles as a recreational ski slope. And he designed the Kistefos art museum in Oslo and a sustainable multi-family residential development in Finland.

He was the design lead for Lego House in Billund, Denmark, which opened its doors to critical acclaim in 2017.

He is the BIG partner in charge of CapitaSpring, a 51-storey landmark at 88 Market Street in Singapore due for completion by December.

He studied at the Harvard University Graduate School of Design and has a background in energy-efficiency research as well as undergraduate studies in economics. He focuses on environmental and economic sustainability in all his projects.

To listen to more of Mr Brian Yang's views, you can register to attend the virtual Design Innovation Forum by the Singapore University of Technology and Design (SUTD) in partnership with The Straits Times.