People in this group are religious and morally conservative, but they also desire greater separation between religion and politics.

They have complete confidence in state institutions and are open to people of other faiths.

This group has the highest proportion of Hindus, and also a significant proportion of Buddhists and Taoists. In terms of socio-economic status, its members are middle class.

Researchers said the group aligns well with Singapore's narrative of maintaining religiosity without compromising on secularism and inter-religious harmony.

These people are less religious and morally liberal. They desire some separation between religion and politics, and are ambivalent towards those of other faiths. They also tend to have great confidence in state institutions.

About half the cluster consists of people with no religion. Sceptic scrappers are also the youngest, most educated and most well-to-do.

Researchers suggest the cluster, which represents the "perennial segment of less religious people in society", may encourage contestations over issues pertinent to religion and the law. 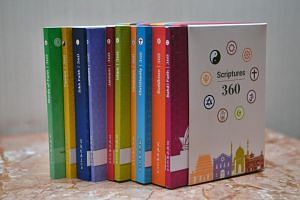 They are somewhat religious, morally conservative, and desire some separation between religion and politics.

They have some confidence in state institutions and are ambivalent towards those of other faiths.

This group has a high proportion of elderly people. Its members also tend to be the least educated and least well-off.

Researchers said the group's lack of positive perceptions of people of other religions may require greater community intervention.

People in this group are more religious and want less separation between the state and religion.

They are morally conservative but warm towards those of other faiths, and tend to be very confident of state institutions.

Researchers say some may worry the group will increasingly demand the integration of religion in the political space. They, however, noted that the group will not want to undermine social cohesion.

A version of this article appeared in the print edition of The Straits Times on March 29, 2019, with the headline 'The four types of Singaporeans'. Subscribe
Topics:
More
Whatsapp Linkedin FB Messenger Telegram Reddit WeChat Pinterest Print Purchase Article Copy permalink