After a decade, the symbolic gavel of the Asean chairmanship has been turned over again from Singapore to Thailand.

It last held the post in 2009, after taking over from Singapore.

Mr Prayut, a retired general, unveiled the theme of its chairmanship - Advancing Partnership for Sustainability - at the closing ceremony of the 33rd Asean Summit at the Suntec Singapore Convention and Exhibition Centre.

Asean's role is recognised internationally and it is at the centre of the regional architecture, he said. "However, Asean is also facing a number of challenges such as trade and political competition, disruptive technologies, transnational crime, inequities and transformation in the region's social structure," he added.

Thailand's key priorities as the new chair, he said, include boosting connectivity in infrastructure, rules and regulations, and people-to-people links to create a seamless Asean. Another focus is sustainability, be it in security, economic growth, the green economy or development.

Asean is also facing a number of challenges such as trade and political competition, disruptive technologies, transnational crime, inequities and transformation in the region's social structure.

He noted that it was important for Asean to make use of technological advances to enhance its competitiveness as member states "work towards the future and move forward together dynamically".

Mr Prayut called on members to "collaborate even more closely", on the foundation of unity and the principles of mutual trust, mutual respect and mutual benefit.

He also promised to enhance the role of Asean in addressing global issues such as climate change.

Wrapping up his speech, he urged the Asean community and stakeholders to strengthen Asean's identity and help it become a people-centred community "that leaves no one behind and looks forward to our future with pride".

A founding member of Asean along with Indonesia, Malaysia, the Philippines and Singapore, Thailand has played a crucial role since the grouping's establishment in Bangkok 51 years ago. 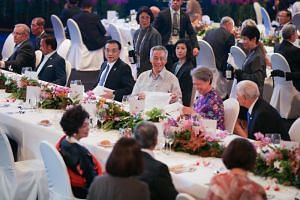 As the incoming chair, Thailand has much on its plate as it walks a tightrope to maintain a balance between regional and international concerns and competing interests.

With the United States-China trade war, Thailand faces the mammoth task of getting leaders to commit to free trade and open markets.

It is expected to help push forward the proposed Regional Comprehensive Economic Partnership (RCEP), a trade pact involving Asean and six of its key trade partners. This week, leaders agreed to conclude next year the negotiations of what would be the world's biggest trade pact, covering half of the global population.

Ms Moe Thuzar, a lead researcher at the Asean Studies Centre of the Iseas - Yusof Ishak Institute, said Thailand's chairmanship will see the continuation of important regional initiatives. On the economic front, the challenge is to help the region navigate uncertainties thrown up by the rise of protectionist and anti-globalisation sentiments, as well as steer negotiations towards a successful conclusion of the RCEP, she said.

"The political-security landscape is where Asean has had to manage and balance big power rivalries in the region, and this is where the role of Asean centrality becomes more important than ever," she added.

Thailand's assumption of the Asean chairmanship, rotated annually among 10 member states in alphabetical order, begins on Jan 1 and lasts until the end of next year. Thailand is expected to host nearly 200 meetings over the period.

The post is seen as a boost to Mr Prayut as Thailand gears up for a general election tentatively set for February, which critics hope will return the military-controlled country to civilian rule.