SINGAPORE - Thai Prime Minister Prayut Chan-o-cha vowed yesterday to push for connectivity among Asean members to strengthen business and investments when Thailand takes over as Asean’s chair next year.

“It is a great honour for Thailand to assume the chairmanship of Asean in 2019 after Singapore,” he said in his keynote speech in Thai on the second and final day of the Asean Business and Investment Summit held at Marina Bay Sands convention centre.

“I give you my word that Thailand will continue to push for connectivity among Asean members in both public and private sectors in order to strengthen businesses and investments in Asean, making Asean an outstanding destination for trade and investment for the global business community,” he added.

The two-day conference, organised annually by the Asean Business Advisory Council, was held on the sidelines of the main Asean Summit, which kicked off on Tuesday (Nov 13) at Suntec City.

The meetings this week mark the end of Singapore’s chairmanship of Asean. The chairmanship, which will be handed over to the mainly-Buddhist country next year, is rotated annually among all 10 members of the grouping, in alphabetical order.

The former general said the private sector is the key driver for economic growth while the government focuses on creating a conducive environment and facilitating the business sector.

He urged the public sector and the private sector to find common strengths and capacities “so we can move forward together with strength, sustainability in a comprehensive way”.

He also said he hopes Asean countries can continue to work together and drive forward the global economy “with people at the centre without leaving anyone behind and looking forward to the future”.

Mr Prayut said the government has been ramping up efforts to improve digital connectivity in Thailand, which can help drive the future economy and become “the new engine of growth”.

Digital penetration has been sped up and online government services increased to facilitate the private sector and help businesses run smoothly and efficiently. 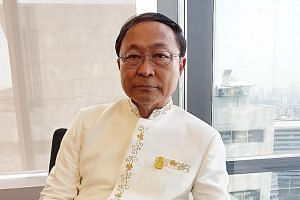 In the last four years, the government has invested in digital connectivity in villages by building fibre-optic network and high-speed Internet to create opportunities for local communities and businesses to sell their home-grown products to the world market.

The Thai government, he said, has also allocated a budget of around US$93 billion (S$128.6 billion) to enhance connectivity in areas such as transport and logistics development in the next five years.

A third of this budget will be invested in infrastructure development within the Eastern Economic Corridor in its eastern provinces to connect and accommodate economic expansion in Asean, he said.

Among the mega-projects are a high-speed train network and deep-sea port and airport expansion.

These developments are examples of how Thailand is planning to advance connectivity in different areas, but good governance remains key.

He said: “We also have to enhance good governance through inclusiveness with the private sector and all stakeholders which will allow Asean to be more responsive to new global changes.”

Thailand is counting down to a much-anticipated election, which has been tentatively set for February.

The country is still under junta military rule, which has continued to wield absolute power since a military coup in 2014.

Mr Prayut, who is the coup leader, has yet to announce his candidacy despite having launched several social media accounts and extensively touring the country, which has sparked speculations over his political aspirations.