Giving a financial overview of the self-help group's 2018 initiatives on Saturday (June 22), Minister-in-charge of Muslim Affairs and Mendaki chairman Masagos Zulkifli said Mendaki also gave out $5 million in study loans and spent $33 million on a host of community outreach programmes under its three pillars of School Ready, Perform in School and Future Ready.

"Going forward, as I said in my Hari Raya speech (on June 15), we want to have nobody behind the red line, which means ensuring all Malay-Muslim students at the very least graduate from an Institute of Technical Education," said Mr Masagos at the organisation's 30th annual general meeting (AGM).

"At the same time we also want to push as many people as possible beyond the blue line, which means getting a university education."

He also noted that Mendaki has been developing new youth mentorship initiatives led by MP Rahayu Mahzam, which will be rolled out before the end of the year.

Mr Masagos, who is also Minister for the Environment and Water Resources, added that support for youths must operate in tandem with support beginning in early childhood.

"What you invest in early childhood development will pay off many more times than if you intervene later," he said.

Kelas MateMatika @ CC (KMM), a programme introduced last September at three locations, aims to equip children aged four to six with basic numeracy skills and empower their parents to be effective guides in their development.

Owing to strong take-up, Minister of State for National Development and Manpower Zaqy Mohamad announced in Parliament in March that KMM would be expanded to five more, potentially benefiting more than 1,500 Malay-Muslim parents and children. 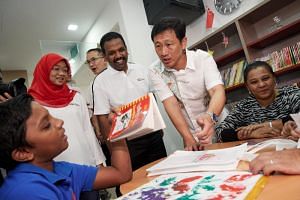 Mendaki's AGM came on the heels of that of its Chinese counterpart the Chinese Development Assistance Council (CDAC) on Thursday, when Education Minister and CDAC chairman Ong Ye Kung announced the easing of qualification criteria for its help schemes.