Although there is no current specific or credible intelligence that points to an imminent terrorist attack on Singapore, ISD noted that it had averted terrorist attacks by two Singaporean youths who were targeting places of worship here.

These cases underscore the very real threat of lone-wolf attacks by self-radicalised individuals, said the department in the third edition of its Singapore Terrorism Threat Assessment Report.

Since 2015, 54 people have been dealt with under the Internal Security Act (ISA) for terrorism-related conduct. Among them, 44 - comprising 32 Singaporeans and 12 foreigners - were self-radicalised.

The report, released every two years, is aimed at alerting Singaporeans to the security environment here and regionally. It was first published in June 2017.

In the previous report in January 2019, the ISD had said the threat to Singapore was high, and the most pressing threat was from terror group Islamic State in Iraq and Syria (ISIS) and its affiliates.

ISIS and terror cell Al-Qaeda continue to be major threats, and the ISD said these groups have stepped up online efforts to inspire their supporters to stage terror attacks.

"Global terrorist groups like ISIS and Al-Qaeda have proven resilient and adaptable, despite their leadership losses and setbacks in recent years," said the department.

"Amid the ongoing Covid-19 pandemic, they have stepped up their recruitment and propaganda efforts on social media, encouraging their supporters worldwide to conduct attacks."

Jemaah Islamiah, a terrorist group linked to Al-Qaeda, remains a latent terror threat too, and could be rebuilding its military capabilities. 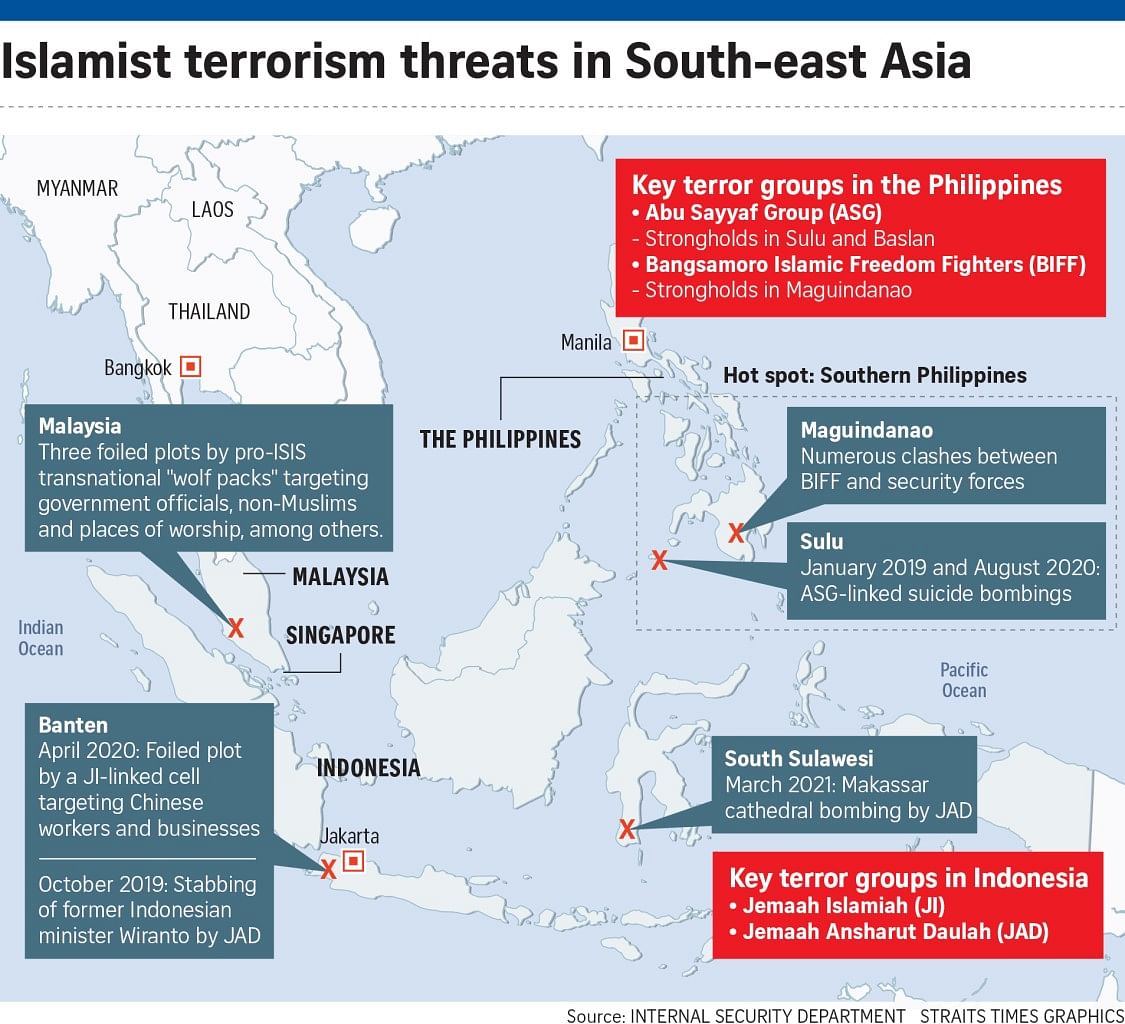 Of the two potential lone-wolf attacks the ISD foiled, one was by a 16-year-old Singaporean student who plotted to attack Muslims at two mosques here on the second anniversary of the Christchurch attacks in New Zealand. He is the first detainee influenced by far-right extremist ideology.

While Singapore has not seen widespread expressions of Islamophobia, it is not immune to them. The ISD said that such rhetoric is prevalent on social media.

In its report, it noted how events abroad can evoke strong reactions in the public, and warned that Singaporeans are susceptible to being influenced by these developments, which can motivate at-risk individuals in society to violence.

Global terrorist groups like ISIS and Al-Qaeda have proven resilient and adaptable, despite their leadership losses and setbacks in recent years. Amid the ongoing Covid-19 pandemic, they have stepped up their recruitment and propaganda efforts on social media, encouraging their supporters worldwide to conduct attacks.

After attacks in France and other parts of the world arising from the republication of caricatures of Prophet Muhammad by French magazine Charlie Hebdo last year, 37 people here were investigated for making inflammatory social media postings, among other things.

The ISD also said the recent Israeli-Palestinian conflict has evoked strong reactions here and elsewhere. These reactions have largely steered clear of extremist and violent rhetoric. Full-time national serviceman Amirull Ali, 20, was the only domestic terrorism case detected where a person was so aggrieved by the conflict that he wanted to engage in armed violence.

The ISD also stressed the critical role of the community in fighting such threats, especially in detecting and foiling lone-wolf attacks by self-radicalised people.