SINGAPORE/BELITUNG (Indonesia) - With their heads tilted back and eyes transfixed on the sky, thousands of people in Singapore and the region watched as a solar eclipse took over the morning sky on Wednesday (March 9).

The spectacle started at around 7.20am Singapore time, peaking at 8.23am where 87 per cent of the sun was obscured. That revealed a bright orange crescent, and produced a shadow that shrouded the island - momentarily turning morning to evening. The phenomenon ended at around 9.30am.

A chorus of "oohs" and "ahhs" broke out at Paya Lebar Methodist Girls' School (Secondary) (PLMGS) as the eclipse took place.

Over 300 students and staff observed the sun through the 11 solar telescopes set up in the school's sky garden, led by vice-principal Alfred Tan, an amateur astronomer.

"It's really beautiful and it's so cool. I've been super excited since this morning," Secondary 2 student Chantal Aw told The Straits Times. 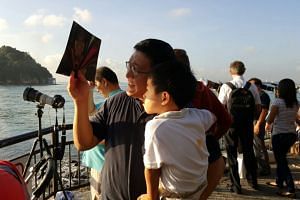 Solar eclipse across Singapore wows students, teachers and families with babies in tow

Mr Richard Quek, a technical support officer from PLMGS, said he was thankful for the fine weather. 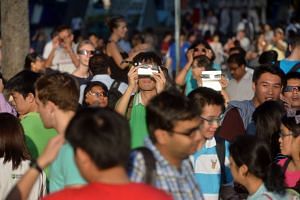 "There was very clear visibility and we were able to see the eclipse very well."

A live feed from a telescope at PLMGS was also beamed to more than 100 schools. 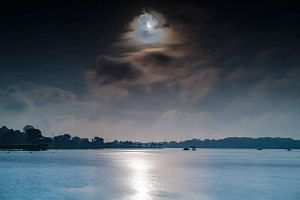 Readers share their photos of the solar eclipse with ST

Elsewhere in Singapore, about 3,000 people turned up at Science Centre Singapore to view the uncommon event.

From 7am, visitors started streaming into the centre and were provided with solar glasses for safe viewing of the eclipse. 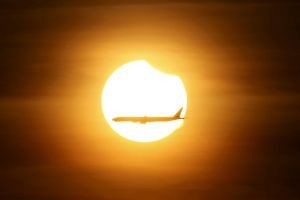 In Pictures: Solar eclipse captivates Singapore and the region

Viewing a solar eclipse for the first time was housewife Vera Cheng, 36, who was there with her husband and three young children.

"We wanted to do it for the experience and get the kids interested in nature," said Ms Cheng.

When asked why viewing the solar eclipse was important to her, Ms Qori Qurrota Aini, 21, said: "It gives you a sense of consciousness, that out there is a moon, and we're beings on earth."

"I might be a little late (for my morning class) but it's okay," added the undergraduate from the National University of Singapore.

At Labrador Park, 200 gathered for an event organised by the Astronomical Society of Singapore (Tasos), where members of the public were able to view the solar eclipse safely through solar-filtered telescopes set up by the society.

Among them was American Jim Kilmer. The 39-year-old, who is in Singapore on a business trip, made a pinhole camera out of two pieces of paper specially for the occasion.

"Where I live in Ohio is really far from the equator, so it's rare to be able to see this," he said.

Another spectator, Ms Eliza Tay, 49, was spotted with her 2½-month-old baby. The member of the astronomical society said she woke up at 4am to prepare for the event. Solar eclipses occur when the moon crosses between the sun and the earth, forming a shadow on the earth's surface. Partial eclipses, as seen in Singapore, occur when a portion of the sun is obscured by the moon. 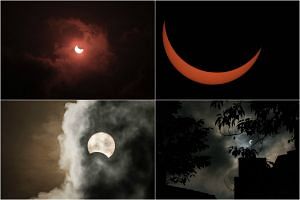 In Malaysia, the partial eclipse started around 7.24am and saw a maximum overlapping of up to 87 per cent in the southern parts of Peninsular Malaysia and Sarawak, according to the National Planetarium's website.

Hordes of astronomical enthusiasts gathered all over Thailand to catch a glimpse of the partial solar eclipse. Over in Bangkok, the National Astronomical Research Institute of Thailand (Narit) handed out free eclipse glasses and goodie bags by Benjakitti Park in the city centre, as about 100 people gathered by its lake for the rare occurrence.

Ms Nopphawan Sukchamnang, 47, came prepared to gaze at the sun with old X-ray films taken of her skull after a previous accident.

“I’m getting goosebumps,” she said. “The last time I saw the eclipse 21 years ago, it was totally dark, and when the sun came out again, the cocks started crowing.” 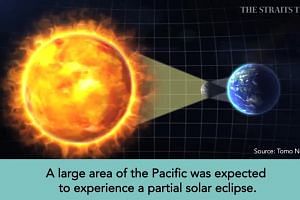 In Indonesia, at least 100,000 foreign tourists were gathered at a dozen hot spots across the country to catch a rare total solar eclipse. A total eclipse occurs when the sun is completely covered by the moon when viewed from the earth's surface, exposing a circular rim of light.

On the island of Belitung, off the east coast of Sumatra, some 7,000 locals and tourists gathered to catch what has been touted as the country's biggest tourism highlight of the year.

Clouds initially threatened to mar the special occasion for Indonesians and tourists alike. But the sky cleared up for the spectacle.

"It was always a gamble, but it came through," said Mr Locky Peters, 25, a bar attendant from Melbourne. "That was the first total solar eclipse that I've seen. It was amazing."

Indonesian accountant Sheilla Anastasia, 40, said: "Seeing the ring is a one time experience. It's out of this world."

Production supervisor Irene Simatupang, 24, who was at the Tanjung Kelayang beach with her father, 56-year-old Jonker Simatupang, said: "It's so awesome as this is a once-in-a-lifetime experience. It's like National Geographic come alive."