Women's education and job opportunities can be boosted by tech: President Halimah

Technology can be a catalyst for narrowing the gender gap, President Halimah Yacob said at the opening of the Women's Forum Singapore in Raffles City Convention Centre yesterday.

The three-day forum, part of an international platform which looks at major social and economic issues from a gender perspective, aims to foster women's leadership for social progress and economic impact across the world.

President Halimah told those gathered at the opening that the disruptive economy could be viewed in a positive light.

"We have, today, a world that is disrupted. Disruption has accelerated changes and challenges to the economy," said President Halimah, noting that a World Economic Forum study found that the automation of jobs was more likely to impact women negatively.

But she said research has also shown that access to and, more importantly, the ability to understand and use technologies could have a positive impact on women's education and employment opportunities.

"By providing skills training and creating the right pipelines, businesses can allow women to be in leadership positions," she added.

Bridging the gender gap through innovation was one of the recurring themes of the forum, which attracted more than 700 delegates and 100 speakers from various sectors and industries in Asean, Europe, China, India and other nations. 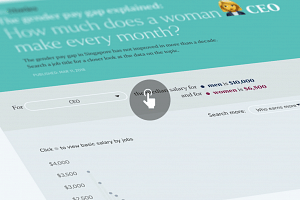 The Women's Forum Singapore, on until tomorrow, will hold more than 20 sessions to discuss topics including artificial intelligence, climate change, smart cities, responsible finance and women in science, technology, engineering and mathematics.

On its opening day yesterday, panellists discussed emerging technological tools such as data analytics shaping the region, the growth of billion-dollar start-ups in Asia and how business education can prepare women for leadership roles.

The head of training and development at The Straits Times, Ms Lydia Lim, who was also moderator of a discussion, said business education could enhance leadership.

"Business schools can make a difference by having courses that empower students to lead and to be effective in their interactions with others. That is especially important for those students, whether women or men, who lack confidence in this area," she said.

The Straits Times is a media partner of the Women's Forum Singapore.

A 2018 study by the McKinsey Global Institute found that Asia-Pacific economies could add $4.5 trillion to their collective gross domestic product (GDP) by advancing gender equality.

It said Singapore could add some $26 billion to its annual GDP by doing so.