SINGAPORE (THE NEW PAPER) - When Madam Aishah Kamari received a call from her daughter on Sunday (July 29), she was puzzled.

Later, she collapsed in tears.

Her daughter, Ms Insyirah Nur Azmi, 20, was among the 20 students from the National University of Singapore (NUS) Muslim Society caught in the 6.4-magnitude earthquake that struck Indonesia's Lombok island at 6.47am on Sunday.

Madam Aishah, 52, a housewife, told The New Paper on Tuesday: "I had not heard the news because it was so early in the morning. When she told me she was okay, I asked her why she was telling me that.

"It was later that I found out about the earthquake from the news."

Ms Insyirah and the other students were in Lombok for a two-week overseas community involvement programme.

They were supposed to fly back on Aug 5 but cut short their programme and returned home on Tuesday. 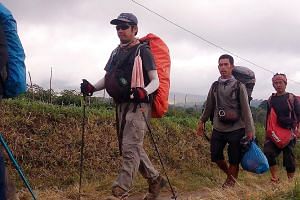 Their Garuda Indonesia flight touched down on schedule at 2.20pm at Changi Airport.

At 3.10pm, the students, tired but relieved, emerged to the teary embrace of nearly 70 relatives and friends eagerly awaiting their return at Terminal 3.

"I am just happy," said Ms Insyirah. "I am just very, very happy to be back."

She had been showering when the ground began to shake.

She said: "I did not know if I should run out. Later, I was more worried when I saw the locals squatting on the ground outside, not knowing what to do."

Her mother will take her to a doctor before cooking her some porridge as she is suffering from a fever and diarrhoea.

Even after the first impact of the quake, some students wanted to stay behind to help out, a suggestion their parents were not too keen on.

Mr Mohd Nizan, 48, whose daughter, Ms Radiah Mohd Nizan, 21, was among those who wanted to stay behind, said: "I did not think they should stay there because they are so young and do not have the experience."

The technician had called the Ministry of Foreign Affairs three times after hearing the news.

Parents said they got increasingly agitated as news of deaths in the earthquake streamed in on Sunday.

At least 17 people have been killed in the quake and more than 330 others injured.

Mr Muhammad Faris Azzli, 22, who is part of the NUS group, said the experience brought them closer.