SINGAPORE - People passionate about what they do will spearhead Singapore's tourism efforts, if the winning team in a content creation and marketing contest had its way.

The team, which called itself Magnificent 7, proposed the idea to help the Singapore Tourism Board (STB) build awareness for its latest brand identity Passion Made Possible.

It pitched the idea of a video series to showcase the diverse passions of Singaporeans.

Magnificent 7 emerged as the winner of the Creator Collective, a free content creation and marketing education course organised by Brand New Media and the Info-communications Media Development Authority, and supported by Singapore Press Holdings (SPH) and the Asia Content Marketing Association.

The winning team walked away with the top prize of a $7,000 grant sponsored by SPH.

Over the course of the 10-week programme, the 70 participants were split into groups of 10 and guided to complete a series of group tasks.

At the end of the course on Saturday (April 28), each group presented their pitch ideas for participating brands such as STB, Chan Brothers Travel and OCBC Bank. 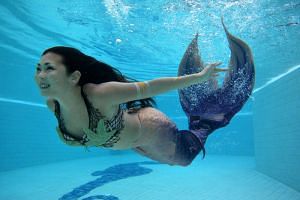 They were graded on originality, target audience, marketing channels, presentation and use of budget.

A unanimous vote led to team Magnificent 7 coming out tops, with judges commending their idea for being content-driven, holistic and engaging.

"They pitched an idea that was holistic and more than just a video. The idea that they had included a comprehensive plan for community engagement, which is a key factor in content marketing", said Mr Damien Bray of marketing agency, Brand New Media.

Members of Magnificent 7 said they were surprised by their win.

"There were a lot of obstacles that I went through, such as getting along with my group mates, giving ideas and helping out, but I managed to bring out the inner me," said the Institute of Technical Education College Central student.

Managing director of programme organiser Brand New Media, Ms Joanne de Rozario, said she was extremely pleased with the pitches presented as it showed the groups' progress over the course of the programme.

Correction: An earlier version of the report said that Ms Cara Nicole Neo, who performs as a mermaid, was involved in the video series. This is incorrect. The report has been updated for clarity.