Dr Tan wrote on Facebook that he and his supporters were disappointed by the verdict, as he had hoped to contest the upcoming presidential election through the deliberative track.

He noted that he lost the 2011 presidential election narrowly, by 0.34 percentage points.

"Nevertheless, I am very comforted to know that many of you were strongly supporting me in this case," he said.

Dr Tan had mounted a legal challenge against the Government's decision to begin counting the five consecutive terms required to trigger a reserved election from the final term of President Wee Kim Wee, saying it was unconstitutional.

But in its written judgement released on Wednesday, the Court of Appeal unanimously found the decision was constitutional.

Even if the upcoming election were not reserved for Malay candidates, Dr Tan would not have met the criteria of helming a company with $500 million in shareholder equity.

However, the Presidential Elections Committee has the discretion to certify that a candidate who does not automatically meet the criteria can stand. 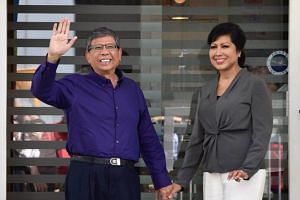 Not a 'fool's errand'

In his Facebook post, Dr Tan said that he did not see his court application as a fool's errand.

He reiterated his stance that the Government should have answered Workers' Party MP Sylvia Lim in Parliament when she asked why it chose to start the count of five presidential terms with President Wee, who was appointed by Parliament but became the first President to wield the powers of the elected presidency.

This meant that the 2017 presidential election would be reserved for Malay candidates.

Instead, the Government challenged her to go to the Court for an answer, said Dr Tan, who added: "That is wrong and I felt the need to respond."

He filed a case to argue that the count should start with the first elected President Ong Teng Cheong.

This, he said, was "what most Singaporeans felt was proper".

The Court of Appeal, however, decided that as a matter of law, the Government has discretion to start the count with President Wee.

"Now that the Court of Appeal has had the final say, I accept the verdict - but with a heavy heart," said Dr Tan.

He added: "Meanwhile, let me be first to wish the participants of the coming reserved PE 2017 all the best, and to do your very best for our country!"