To take up citizenship is a deep commitment and "two-way process", said Prime Minister Lee Hsien Loong yesterday at a ceremony to welcome new Singaporeans in his constituency.

Addressing 150 new citizens of Ang Mo Kio and Sengkang West in Teck Ghee Community Club, Mr Lee said: "Your fellow Singaporeans welcome you formally into the family today, and you will bring with you your experiences, your skills, your talents, your warmth, to enrich the diversity of our society."

Mr Lee, who is also adviser to the Ang Mo Kio GRC grassroots organisations, added: "At the same time, naturally, you have to make the effort to become a Singaporean, to contribute your part to Singapore."

Citizenship ceremonies, held every three months or so in group representation constituencies (GRCs) across the island, aim to foster a deeper sense of belonging among new citizens.

Taking up citizenship is a deep commitment "much more than carrying a new passport", Mr Lee said, noting that those who do so have to take the first step to put down roots here and fit into a new society. Most new citizens, he added, would already have started this process.

"You were born in different parts of the world, most probably you've lived in other countries before coming to Singapore," said Mr Lee. "But you came to Singapore and you've lived, worked or studied here, and many of you started your families here."

Highlighting that the Republic's history and success were built on the backs of immigrants from near and far - people who worked hard for a living and decided to make this place home - he said new citizens' stories will add to Singapore's.

He then expressed his hope that Singapore will remain the home of their children and grandchildren, adding: "I hope also that in time to come, you will appreciate even more why Singapore is unique, and what you can do to keep our country special and our people united."

You were born in different parts of the world, most probably you've lived in other countries before coming to Singapore. But you came to Singapore and you've lived, worked or studied here, and many of you started your families here.

Ahead of a lunch at the community club, Mr Lee urged the new citizens in his GRC to be active citizens and involved in their communities.

Software engineers Nguyen The Huy, 33, and Tran Thi Tuyet Mai, 33, were among those who received their citizenship certificates.

They have been working in Singapore for the past decade or so after graduating from the National University of Singapore, and were attracted by the education system here, among other reasons.

"We appreciate the diversity in the system and believe it will help our children gain a broader perspective of the world," said Mr Huy, who looks forward to celebrating both his birthday and National Day on Aug 9 next year, for the first time as a citizen. 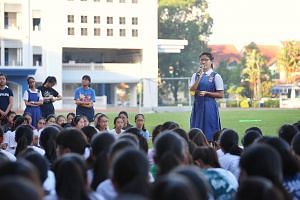 Other new citizens included housewife Tai Bee Yoke, 56, and her husband Huang Fu Meng, 62, a building foreman, who came to Singapore from Malaysia in search of better career prospects in the 1970s.

"I'm happy to receive citizenship today, as our three sons are all citizens," said Madam Tai, a former factory worker. Her sons, aged between 30 and 35, helped with the couple's applications.

She added: "I was initially worried about how we would spend our silver years. Our children are here and this has been our home for decades. We want to spend our retirement years here."