While numbers are not available on how many Singaporeans are involved in road accidents overseas, there were five reported fatal cases last year, with three in December alone. In 2016, there were two reported cases of fatal accidents.

In the most recent case, 33-year-old interior designer Koh Yuan Ling died in a road accident in South Africa on Dec 21.

Travel agencies here have noted a greater demand for self-drive holidays to destinations such as the United States and New Zealand - where recent accidents occurred - with the number of such holiday packages sold increasing at a rate of about 15 per cent per year.

Recognised in more than 150 countries, the permit is a small booklet which translates the information on a person's driving licence into 10 languages.

Fatigue is one factor behind why those driving in other countries are involved in accidents, said Mr Tay, who is also chairman of the Singapore Road Safety Council.

"When you first land you should have sufficient rest. After a long flight, you're not in any state of mind to drive."

He added those planning to drive overseas should prepare themselves ahead of their trips.

This includes becoming familiar with the terrain and weather conditions, as well as bringing along road maps or global positioning system devices to navigate through the destinations.

Said Ms Alicia Seah, marketing communications director for Dynasty Travel: "It is important to note that in some countries such as the US, (people) drive on the right side of the road, which is different from Singapore, where we drive on the left side."

Driving on the right-hand side of the road is the practice in more than 160 countries and territories worldwide.

Road safety expert Gopinath Menon said it can take as long as two to three weeks to get used to driving on the opposite side of the road when overseas.

Singapore's urban conditions also mean drivers may not be used to driving at high speeds or on long stretches of highway, said Mr Menon, a senior transport research consultant with the Nanyang Technological University.

"When driving long distances, you can get tired or complacent to your surroundings," he said.

He added: "You have to be prepared. Driving overseas is not the same as driving in Singapore."

Dec 22: University of California, Berkeley student Justin Yeo Jun Xi, 22, and his parents died in a collision with another vehicle in Arizona in the United States. His 19-year-old sister, Ms Justlyn Yeo Jing Hui, was seriously injured. 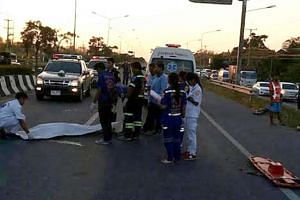 June 5: Business analyst Y.L. Tan, 40, died after his vehicle collided with a four-wheel-drive vehicle heading in the opposite direction along the Indian Ocean Drive near Perth, Western Australia.

May 4: Ms Rena Ong, 29, and her husband, Mr Chen Zhi Hao, 39, who both worked at an audio-visual firm, died after their camper van crashed into an oncoming pick-up on New Zealand's South Island.

Sept 10: Mr Ng Kai Jie, a 22-year-old full-time national serviceman, suffered head injuries and died after the rental car he was driving crashed into a lorry on Malaysia's North-South Expressway.