More Singaporeans are trying their luck at games such as 4D and Toto, according to the latest survey by the National Council on Problem Gambling released yesterday.

The 2017 survey found that 52 per cent of the Singapore citizens and permanent residents (PRs) aged 18 and above polled said they had gambled in the past year, up from 44 per cent in the 2014 survey.

The increase is statistically significant, said the council, which has conducted the survey of 3,000 people every three years since 2005 to find out the extent and pattern of gambling here.

Council member David Chan, a psychology professor, said the rise was due mainly to more people betting on 4D and Toto, and gambling socially, such as playing mahjong with friends.

In fact, 4D is the most popular game among those polled last year.

Some 42 per cent placed a wager on 4D, followed by Toto (36 per cent) and social gambling (21 per cent). Just 1 per cent gambled online, betted on horses or tried their luck at the jackpots in casinos here. 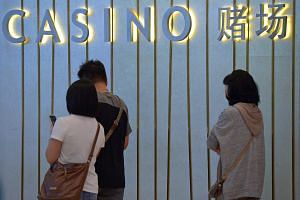 No increase in gambling addiction after casinos opened

The growing popularity of 4D and Toto is reflected in the billions spent on these games.

In the Singapore Totalisator Board's (Tote Board) last financial year ending in March last year, $7.2 billion was waged on lotteries such as 4D, Toto and Sports Betting. This was a 15 per cent rise from $6.2 billion in its 2012/2013 financial year.

The Tote Board owns Singapore Pools, the sole legal operator of lotteries and sports betting here. The survey also found that more Chinese Singaporeans or PRs gambled last year - 62 per cent did so, up from 53 per cent in the 2014 survey. Nearly two in three Chinese had at least one wager last year, compared with one in three Indians and less than one in 10 Malays.

Many Chinese learnt to gamble at a young age, said observers and counsellors of gambling addicts, adding that gambling with family and friends, especially during festive seasons, is seen as acceptable.

But they did not think the rise in the percentage of those who had gambled is a concern, as most parted with a small sum - the median bet last year was $30 a month, up from $20 a month in 2014.

The lure of million-dollar jackpots, like the recent $12 million Toto Hongbao draw, has led more people to test their luck, they said.

Said Mr Billy Lee, executive director of Blessed Grace Social Services, which runs a support group for gambling addicts: "People see their friends or colleagues buying Toto, hoping to strike the million-dollar prize, and they also join in and try their luck."

Meanwhile, the percentage of those addicted to gambling, known as pathological or problem gamblers, inched up from 0.7 per cent in 2014 to 0.9 per cent last year.

While the ratio of gambling addicts remains largely stable, it is still a cause for concern, said Professor Chan.

Addicts show a lack of self-control, gambling beyond their means and with a greater frequency than intended, he added.