An orthopaedic surgeon found guilty of professional misconduct by a disciplinary tribunal for certifying a migrant worker fit for work one day after his collarbone operation has appealed against his conviction.

Dr Kevin Yip Man Hing did not give any sick leave to the 47-year-old construction worker, apart from the two days that the patient spent in hospital.

Instead, he certified that the Chinese national was fit for "light duties" upon discharge, as well as on two subsequent visits.

At his appeal before the Court of Three Judges yesterday, Dr Yip argued through his lawyer, Mr Navin Joseph Lobo, that the patient had agreed to go back to work and it was appropriate to give him light duties as the benefits of being mobile early enabled rehabilitation to begin sooner.

It handed down a five-month suspension to Dr Yip, 57, last year after finding he had "failed to ensure that adequate sick leave was given to (the patient) in light of his condition and the nature of his occupation".

The SMC has also appealed against the sentence, arguing for a longer suspension of 18 months. 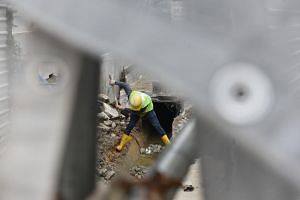 Proposed changes to give injured workers greater assurance of compensation

The worker was injured on July 7, 2011, when he fell from a one-storey height. He suffered a collarbone fracture, rib fractures and an injured wrist.

On the same day, Dr Yip, who has a private practice at Gleneagles Medical Centre, carried out surgery on the fractured collarbone. The operation stretched till the early hours of July 8 and the patient was discharged later that day. Dr Yip certified him fit for light duties from July 9 .

The worker saw Dr Yip again on July 11 and July 18 for post-surgical reviews and was similarly certified fit for light duties.

During Dr Yip's disciplinary inquiry, several experts testified about the duration of medical leave that should be given.

SMC's expert said "a minimum of two weeks of sick leave should have been given at discharge with reassessment thereafter".

SMC's lawyer, Ms Chang Man Phing from WongPartnership, said even though early mobilisation was beneficial, it did not mean the patient should have received "zero post-operative sick leave". She argued that Dr Yip's lack of remorse, including omitting the rib fractures in his medical report and casting aspersions on the practice of TTSH doctors, warranted a heavier sentence.

The court will give its decision at a later date.

A version of this article appeared in the print edition of The Straits Times on February 01, 2019, with the headline 'Surgeon who did not give sick leave fights conviction'. Subscribe
Topics:
More
Whatsapp Linkedin FB Messenger Telegram Reddit WeChat Pinterest Print Purchase Article Copy permalink