SINGAPORE - Supermarkets are offering customers refunds on recent purchases of Australian rock melons, following a recall announcement on Thursday night (March 8) of all of the fruit, also known as cantaloupe, imported from the country.

A deadly listeria outbreak in Australia linked to contaminated melons from a farm in New South Wales has killed at least four people, though Singapore's Agri-Food and Veterinary Authority (AVA) said on Thursday that there were no reported cases of listeriosis linked to the consumption of rock melons here. Listeriosis is an infection caused by the listeria bacteria.

While eating food containing the listeria bacteria does not cause illness in most people, it can lead to sickness and even death for those with weakened or compromised immune systems, such as newborns, pregnant women and the elderly. Symptoms of listeriosis include fever, muscle ache and diarrhoea.

The AVA has advised anyone with these symptoms to seek medical attention if they appear within 70 days of consuming an Australian rock melon.

Food safety tests on samples of locally sold rockmelons are ongoing, and the listeria monocytogenes bacterium has not been detected in samples tested thus far, the AVA told The Straits Times on Friday (March 9).

Nearly 90 per cent of the 6,800 tonnes of rockmelons imported to Singapore last year (2017) came from Australia, it added.

The expanded recall follows fresh information from Australian authorities that more consignments of contaminated rock melons had been exported to Singapore.

The AVA had earlier completed a recall of two batches of the fruit sold at Sheng Siong supermarkets and wet markets on Monday.

In response to queries, a Dairy Farm Singapore spokesman said that all Australian rock melons were removed from Cold Storage stores as of 7.45pm on Thursday evening.

Customers who had purchased them "within the last couple of weeks" may visit any Cold Storage outlet with a receipt for a refund, the spokesman said. 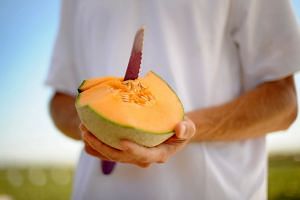 FairPrice said that it had completed the precautionary recall and continues to offer rock melons imported from Indonesia and Honduras.

"As a gesture of goodwill, customers who have purchased Australian rock melons from March 7, 2018, at our stores can request a refund with a receipt," said a spokesman.

Sheng Siong, which had replaced the affected batch with smaller rock melons from Western Australia after the first recall, said it has since removed all of the fruit from Australia from its stores and urged customers to dispose those they had bought or return them for a refund.

Another major supermarket, Giant, gets its rock melon supply from Indonesia and is unaffected by the recall.

Rock melons from Australia remained available for sale at some wet markets and fruit stalls on Friday afternoon, as information on the recall had yet to trickle down.

Fruit sellers at Ghim Moh market, Bishan and Toa Payoh said that they had not been informed of a recall by their suppliers at the Pasir Panjang Wholesale Centre, where nearly half of all fruit and vegetable imports pass through. But Mr Steven Tan, a sales assistant at a fruit stall in Bishan, said that they decided to stop selling rock melons after being informed of the recall by a customer.

At Toa Payoh West market, Mr Lim Teck Hee, owner of Jim Fruits, said that he called his supplier to return his stock of Australian rock melons after hearing the news on Friday morning.

"I just bought two boxes last week... I don't plan to order melons from elsewhere since no one wants to buy them now," said Mr Lim, 51.

Mr Lee Desmond Bernavey, director of fruit and vegetable wholesaler FreshDirect, which supplies to restaurants, said that it would take time for wet market sellers and fruit stalls to be informed.

"Money lost for me is better than life lost...Singapore has always had high standards for food safety, so we need to be responsible," said Mr Lee, 45.

The recall will not be too damaging for fruit sellers even though most rock melons are imported from Australia, he said. This is because consumers do not buy them regularly and there are also other types of melons available, he added.

Mr Tay Khiam Back, chairman of the Singapore Fruits and Vegetables Importers and Exporters Association, said that compared to fruits like apples, melons come in smaller shipments of 100 to 300, making the situation easier to "keep under control".

Accountant Gina Lim, who picked up an Indonesian rockmelon from FairPrice Finest at Junction 8 on Friday, said that she was not overly worried.

"I think it's good that (the authorities) are being cautious, but only one farm was affected so I don't think there's a need to panic," said Ms Lim, 42.