If his commanding officers had told them to stop the "kolam" ritual which involved Corporal Kok Yuen Chin getting into the 12m-deep pump well, the group of servicemen would have listened.

During the May 13 incident last year, Cpl Kok was pushed into the fire station's pump well as part of activities to mark the completion of his national service, and he later drowned.

Nur Fatwa was testifying on the second day of the trial in which the officers in charge of Tuas View Fire Station on the night that Cpl Kok, 22, drowned are contesting the charges.

The commanders were each charged in July last year with aiding a rash act that caused grievous hurt by illegal omission.

They had allegedly failed to prevent a group of officers from pressuring Cpl Kok to enter the pump well, thereby endangering his life.

Three more officers were charged for their involvement, of which two - including Nur Fatwa - have been dealt with in court.

Yesterday, Nur Fatwa, a staff sergeant, said he would have listened to Chong and Nazhan had they told him to stop"because they are (my) supervisors". 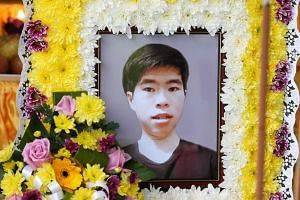 NSF who drowned was pushed into well by colleague, inquiry finds

Nur Fatwa, who in October last year had been sentenced to one year and four weeks in jail for pushing Cpl Kok into the well and telling another officer to delete footage of the incident, is currently under home detention.

Elaborating, Nur Fatwa said he would obey the instructions of officers who held higher ranks than him out of respect. This is why he listened to Mohamed Farid Mohd Saleh, 34, when the first warrant officer allegedly told him to push Cpl Kok into the pump well, he added.

Farid, who was charged with abetting a rash act causing death, is expected to go on trial next month.

Nur Fatwa said he brought up the "kolam" ritual twice on the day of the incident: Once in the morning during attendance taking, and again at night when the officers on duty - including Chong and Nazhan - gathered in the control room to celebrate Cpl Kok's impending operationally ready date. However, he could not remember if Chong or Nazhan had heard him or responded.

Following the celebration, some officers carried Cpl Kok to the pump well across the yard, and others, including Nazhan, gathered around. At no point did anyone tell them to stop the act, added Nur Fatwa.

At the well, Nur Fatwa said Nazhan had told Cpl Kok that if he could not swim, he should jump closer to the well's edge.

What "you are remembering is not true because video evidence does not show that", said Mr Retnam, who also pointed out that, similarly, what Nur Fatwa recalled about Nazhan might not be true.

When questioned by Chong's lawyer Wee Pan Lee, Nur Fatwa said he brought up the "kolam" ritual to tease and scare the full-time national serviceman (NSF).

He also agreed that the act of pushing Cpl Kok into the well was unplanned and that nobody, including Chong, could have known the teasing would result in the push.

The trial continues today, when the officer who found Cpl Kok at the bottom of the well, Staff Sergeant Ng Meng Kiat, is expected to take the stand.