SINGAPORE - Mr Tang Kong Yuan, 89, has hawked his wares at the open-air Sungei Road flea market for 40 years. Within the next few weeks he will be doing so from his own stall in Chinatown Market.

The fit and sprightly senior received the keys on Thursday (May 11) to his new business premises, where he will be selling watches and jewellery.

As one of the original 11 permit holders of the Sungei Road market, he gets to rent the hawker stall at subsidised rates. His rent is $184 a month but it will be fully subsidised in the first year, and halved during his second year there.

The 11 vendors are from a pool of 31 rag-and-bone men who, "because of their chosen trade", were excluded from a government programme to resettle street hawkers in purpose-built markets and hawker centres in the 1970s and 1980s. All 11 have been given the option of renting stalls at selected hawker centres in the city area at subsidised rates.

Mr Tang has four adult sons. He said he also has a 10-year-old daughter with his Indonesian wife whom he has to provide for. 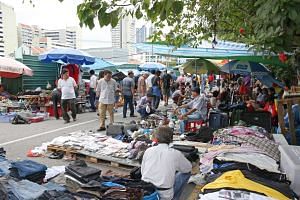 Decades-old Sungei Road flea market to shut for good; July 10 will be its last day

He informed his clients about his big move. He said: "I don't want to hawk illegally and be summonsed by the authorities. I don't want to rely on others as well. So I got a stall to try out. If I lose money after six months, I will stop and find other means to make a living."

Meanwhile, fellow vendor Mr Chin Kim Bon, 70, will be relocating to the second floor of the Golden Mile Food Centre in June after spending two decades at Sungei Road.

He sells goods such as vases, jewellery and books. The monthly rent of his new stall is $400 and he had been making about $1,200 on average each month at Sungei Road, which was rent-free.

Mr Chin said: "The authorities gave me my stall on Tuesday (May 9), the same day I had applied for it. They were very fast. It may not be easy to sell my goods there so I'll have to see if they will appeal to the people who shop there."

Mr Chin, who has two grown-up sons, said he would feel restless if he did not work and chooses to keep active this way.

He said what he would miss most are his friends and the Sungei Road flea market itself. "There's freedom at Sungei Road, I can manage my own time and there's no start-up cost."