At a press conference held on Monday morning at the consumer watchdog's office in Ghim Moh, its executive director Seah Seng Choon said it was expecting more complaints and urged consumers to "seriously think about protecting their rights".

Most of the affected couples had paid between $2,000 and $7,000 for the salon's services, which range from pre-wedding photoshoots to the rental of wedding attire.

"Consumers cannot assume that businesses will be around forever, as they come and go," said Mr Seah, who added that Case was attempting to contact the salon's owners.

His advice was for consumers to take out insurance for such pre-payment packages, especially weddings, and to pay as little deposit as possible.

When The Straits Times visited Case's office at around 10am on Monday, at least 15 couples were there to file complaints.

Business executive Tay Jiet Kai, 30, who bought a $3,688 bridal package in January this year, said he was shocked to hear about the salon's abrupt closure. The salon is located along Amoy Street.

"Their services came highly recommended from a friend who bought a similar package (in 2013)," said Mr Tay, who had paid a $2,000 deposit to Sophia Wedding Collection. His wedding is in early November.

"Right now, I have to focus on getting another studio so our wedding plans will not be disrupted. My wife-to-be is very distraught. She couldn't sleep on Saturday night when she found out about the studio."

Customer service coordinator Cheryl Poh, 25, said her friends had advised her to do so instead of going to Case. "At least they can schedule a court hearing, but whether or not the owners turn up is another matter." 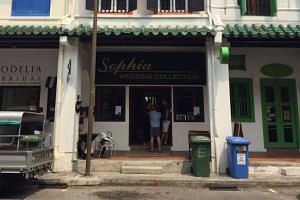 News of the abrupt closure started circulating late last Saturday, and numerous police reports have been made by disgruntled customers.

She learnt of the salon's closure via social media and subsequently set up a WhatsApp chat group for affected couples, which has since swelled to 100 members.

Staff  whom The Straits Times spoke to claimed that the owners had already left Singapore.

Wedding photographer Pierre Oei, who works freelance for the salon, said he had heard rumours that the business had run into financial difficulties several months ago. He is still owed about $4,000 for an overseas shoot he did in April.

Correction note: An earlier version of this story said that Mr Seah Seng Choon was the president of Case, when he is actually the executive director. We are sorry for the error.